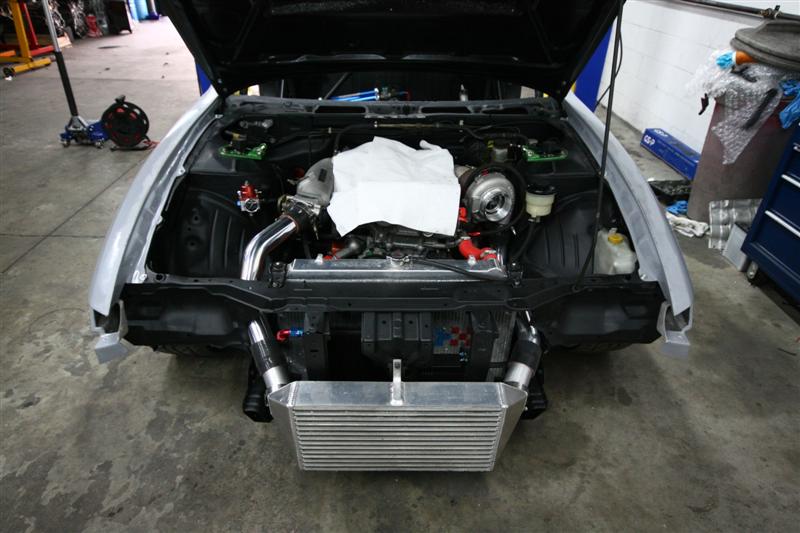 While Zach’s car is coming along rather nicely, I thought I would feature some of the finer points of the build for you guys. Zach is a technically savvy guy, and did a lot of the work on the car himself. He decided to send it to SG for a final go-over and SG electrical system. Naturally when it got here, we started to tear it all apart and start from a bare shell.

The car has a lot of REALLY nice parts, including battle version links, aftermarket lower control arms both front and rear, a genuine Tomei Genesis engine, a Full Race 3076 turbo kit, including manifold, Tial gate, turbo and intercooler. Since the car was built off of a full street car, there were a ton of “unneccessaries” still hanging out in the chassis. Once we got it down to a bare shell we painted everything flat black for Zach, to go with his flat black interior / flat white exterior plan.

Next we started to re-do some of the systems on the car, such as re-locating and re-plumbing the fuel system, including the RIPS racing swirl pot. We wanted to get as much out of the rear trunk area as possible, incase of impact. We used a west coast batteries PC680 battery, and welded nuts to the chassis for easy assembly / disassembly.

After the trunk area was completed we bent up and riveted on a bulkhead for the rear seat area, as the fuel system has to be isolated from the drivers compartment. We also installed a Driftworks roof scoop to aid in driver cooling, a dual 3″ hose duct off of the factory HVAC inlet for the same reason

Prep on the engine wasn’t that intensive, all we did was check the valve lash was still in spec, and removed the exhaust manifold, re-did the water and oil lines for the turbo so that they had plenty of room from the manifold, and used stainless hardware and safety wired the turbo to the manifold. We simplified the coolant and air systems under the intake manifold as well.

Once the engine was back in the chassis it was time to look at re-plumbing the coolers for the vehicle. We re-did the power steering cooler with a setrab core and luckily we were able to retain the factory power steering reservoir which is making for a very clean install.

The oil system was cleaned up, it had a redundant oil filter in line the oil cooler take off plate (not installed by Zach!), so we removed that and cleaned up the lines, along with a new line to the relocated accusump in the rear seat area.

We also ran a new -8 aluminum fuel hardline from the high pressure fuel pump, which came out gorgeous, teeing off to dual -6 inlets on the fuel rail. The return uses the factory fuel line, which is more than adequate for low pressure fuel, and is much lighter than aftermarket plumbing.

Next up was the suspension. Naturally we sent the knuckles down to Brian at MA-Motorsports to modify them for super angle, these worked great on Briggs’ car and are a must for a drift car. The rest of the suspension has for the most part remained, but a full setup and alignment is soon to come. We did have to machine the front lower control arm pins, as the taper that was machined into them originally was not correct for the S14 upright.

Now we’ve just mounted up some body work, have a front bash bar to fabricate and are going to start on the electrical system for the car. It should turn out great when it’s all done – hopefully in just a few weeks.