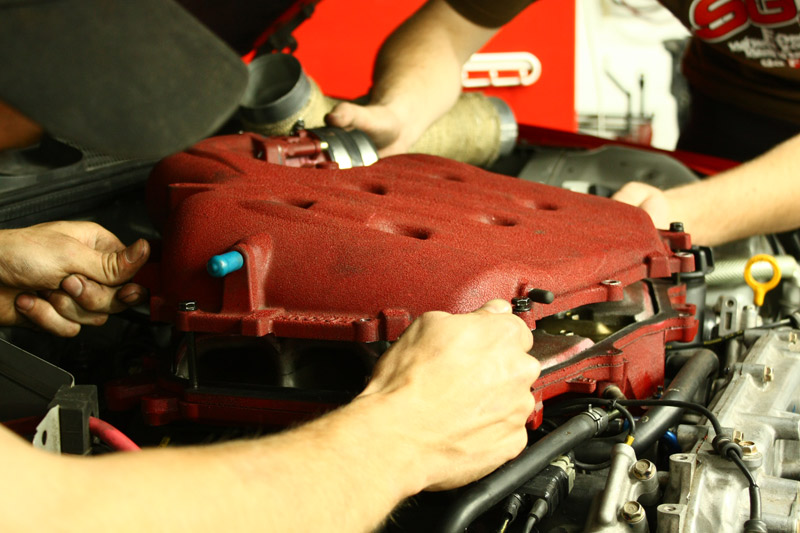 We’re proud to be the producers of the highest horsepower stock block, stock head VQ35 in the world. Our goal was to optimize all of the external components of the engine, so that further internal engine work could reap the maximum possible gains.

During dyno testing we found that a significant amount of vacuum was being pulled in the intake plenum and it became our main focus to for one find out how much power was being robbed, and find a solution to get that power back.

The first test we did involved physically removing the upper plenum in the middle of a dyno run, to see exactly what kind of power the engine would produce with the intake runners entirely open to the atmosphere. We found 25+ wheel horsepower. Following that incredible discovery, we built an extremely large plenum out of aluminum to see if plenum volume was the issue. No gains were found, so the next logical step was to increase airflow into the plenum. A large 3.5” hole was opened in the top of the plenum with a velocity stack that would allow airflow additional to what was coming through the factory throttle body. That 25 wheel horsepower came right back, so we concluded inlet flow was more of an issue than the actual plenum flow. The engines power output at this point was 334whp.

We literally split the plenum in the middle of a full throttle dyno pull. It was pretty wild!

The next step was to make a large 90mm throttle body work with our Motec M800 and to develop a plenum that could freely get the air to the runners without being a restriction, both in the elbow and throughout the plenum closer to the runners themselves. We enlisted Carbotron for this job and he built us a fantastic carbon test plenum.

With a complete intake system in a fully drivable state we found 18whp and are now making 327whp. We’re now working on a solution for the daily driven crowd, that will allow the power to be found without sacrificing drivability or engine smoothness. Perhaps only a sports version will be available that somewhat decreases drivability, we will know more in the future.