Modified wanted to test an intake back-to-back on an FR-S and I suggested we do an ECUTek ECU flash at the same time. ECUTek were great and wanted to support the magazine and supplied us with the licence, and so we asked Vinh for his car to do the testing. You may have seen Vinh’s car at different shows or at CSCS, it has bright orange wheels and I think it looks pretty damn cool. Waiting for Vinh to start  beating up on it like he does his ex Grand-Am IS300.

At Pat Cyr’s shop Cyrious Garageworks. Two 86’s in matching white side by side. Pretty cool!

Naturally the first thing we did was baseline the FR-S, with a vacuum reading on the intake manifold to measure just how much of a difference the AEM intake would make at high RPM. We noticed an average amount of vacuum at high RPM during the pull, about the same as my 350z was pulling with the stock intake plenum and throttle body.

Something noticeable about the AEM intake is that it uses a MAF translator box. Exactly what the box does I am unsure of at this point – but obviously it alters the signal from the MAF. this could be to compensate for a different diameter tube or – I suspect – it is used to lean the engine out to produce more power in conjunction with the intake.

The car baselined at 158whp – and then made 169whp with the AEM intake. So a good 11whp gain peak-to peak, and even a little bit more than that past redline. Most of the power was gained up top, above 5200rpm. One thing to note is the common “dip”  around 4000rpm associated with the FR-S/BRZ. I haven’t done enough research at this point to know exactly what causes the dip, but I wanted to try and tune out as much of it as possible. 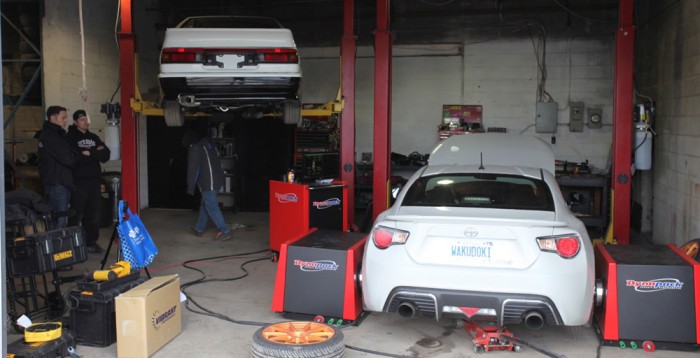 Once we got the car ECUTek flashed and started tuning I was able to find some more power – but it was a long and tedious process. Because the stock computer does not support live map updates to its ROM, the entire ECU must be re-flashed for each change. I had over 35 pulls and 17 map revisions before the car was done – each map takes about 3 minutes to upload and reset the ECU. With variable intake and exhaust cam timing, maf calibration and multiple ignition maps, there is a lot to test. However, this testing time was important to develop a strong base map to use with other client’s cars with similar bolt-ons. I spent a lot of time working on the dip, and while I was not able to get the base of the dip up, I was able to get the duration of that torque loss to be much less, and for it to occur slightly earlier. I’m sure with a little more time we could improve it further. 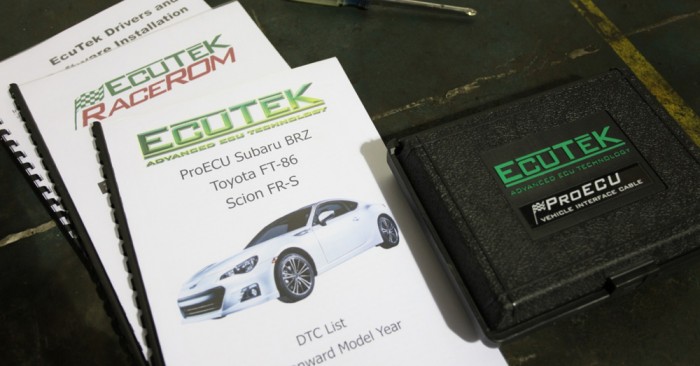 ECUTek is as professional as they come. They sent a ton of documentation, and a nice injection moulded carrying case for the OBDII cable and licence dongle.

More work on the map found a lot of power past peak HP, so the engine is asking kindly to rev out a little bit more. A higher RPM limit and some further tuning at higher rpm will certainly be in this engine’s future. 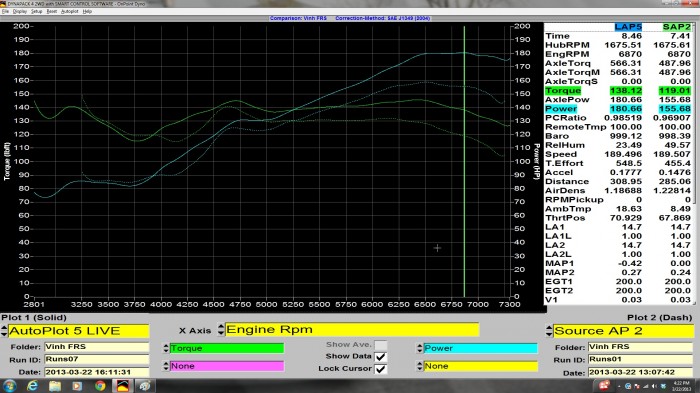 This graph compares the mostly stock stock (just a MillTek sport primary cat-back exhaust) FR-S with the final tune. For those looking into the details – you will notice the different correction factor – this is because the door was open for much longer and the space was VERY cold on the stock engine run. 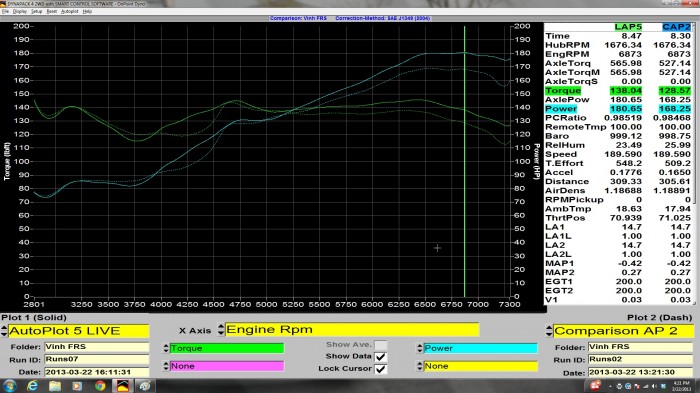 This graph compares the car after the intake, to after the final tune

The car has a ton more jam up top, and is very noticeable (as it should be!). Looking forward to trying ECUTek’s race features soon, including auto-blip downshifts, flat foot shifting, RPM limit by gear and launch control. We are now offering FR-S and BRZ Ecu Reflashes to anyone in the GTA, please email us: sales@onpointdyno.com to enquire about package pricing including the ECUTek licence and custom dyno tuning.