I have become more involved in the Scion FR-S build by Top Tuner for the Scion Tuner Challenge, and recently the car has come back from out east where it had some wide bodywork installed along with a lime green paint job. Unfortunately the timeline is tight and CanJam has less than a week to finish the mechanicals of the car.

The guys got a supercharger at the last minute, and as I would already be at Shannonville on the Saturday to do the dyno inspection testing for GT Challenge – and since there was a lapping day in the evening – and since CanJam would be at the track racing in GT Challenge anyways – we decided to bring the FR-S down early, tune it on the dyno first, then once the day of regional racing finished up we would take it out lapping. 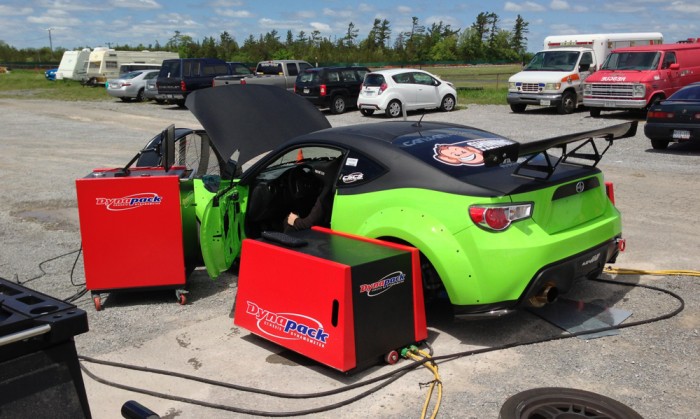 Dyno tuning at Shannonville, on gravel!

The car didn’t make as much power as we were hoping on the dyno, but the engine still tuned and ran flawlessly with the ECUTek. And while I am disappointed in the power, we got it working pretty damn well on the racetrack that evening. Without the nitrous the best time was a 1:59.7xx, which is a pretty fast street car on r-compound time. For a car with 215whp on street tires, that is pretty good. With the nitrous the car was 10kph faster on the back straight, and in power alone the data shows the car would be 1.5 seconds quicker. Unfortunately there was a ton of traffic out there and I didn’t have the opportunity to put down a good lap with the spray on.

Wheel fitment has not yet been matched to the new fenders!

However the AIM Solo we were using allowed me to split the track into 4 splits, and the best of the 4 splits shows a 1:58.4 – with 2 or 3 of those splits being without the NOS. 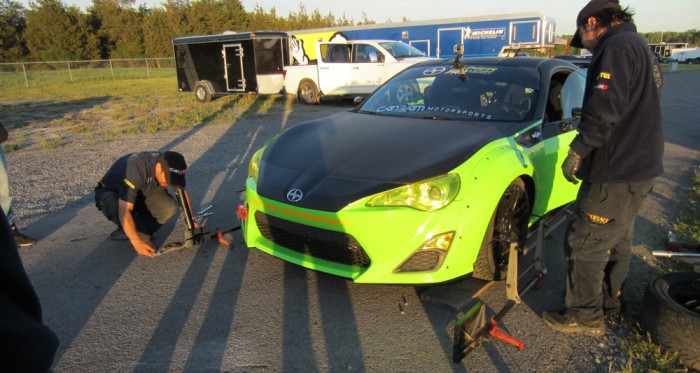 We are now on the dyno with the car again trying to find more power, unfortunately the smaller supercharger pulley we installed has not gained any power at all! The car leaves tomorrow for Vancouver, where we will be doing drag racing and time attack. Wish us luck!