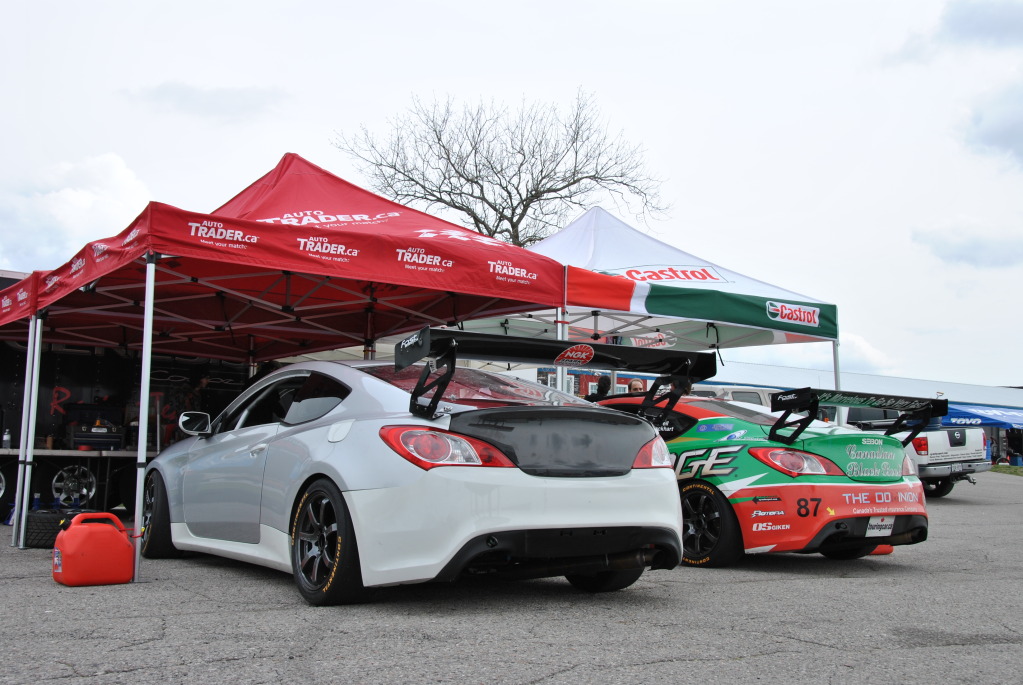 I had a really nice post going for everyone here that I just deleted – because I never got a chance to finish and upload it. It was from about 3 days ago when we had no idea whether the #86 car was going to even RUN much yet drive and be ready to test. We had yet to dyno it, drive it, test the brakes, suspension and frankly most of the electrical system.

Well, that post never happened because between all of us at SG we were putting in roughly 60 hours a DAY to get the car done. Frankly, there wasn’t even enough time to get the camera out and take some pictures – but I did manage a few blurry ones on one occasion as it would have been a shame not to capture ANY of that excitement.

As you’ve figured it out I am writing this post after our test day. Second test for the #14 car, first ever outing for the #86 car. And let me remind everyone by saying – I HATE testing cars for the first time at Mosport. I especially hate it when it’s a 100% brand new build. Remember, this car was a bare shell only 2 months ago. The good news is, the car did not fall apart. Infact it ran REALLY well and the only issues we’re having, we are having with both cars! It seems the wastegate cannot divert any more air around the turbo and above 6000rpm it continues to build boost until ultimately hitting the ECU programmed limit, which shuts the engine down to protect the motor.  To solve the issue yesterday we just ran the engines to 6000rpm, but when we shift gears the thing totally falls out of it’s power band 🙁

Every year it feels great to get back to Mosport. Esspecially when you compare it to a slower track like Cayuga or Shannonville. Every year going down corner 4 at over 200km/h for the first time just makes the heart so happy. The car’s were handling really well with the new penske/anze front dampers. There wasn’t the same floaty feeling the car had last year, and you could trust the car a bit more. That being said, it was very understeery as we were running with the rear sway bar disconnected and the wing at medium angle for some added safety.

At the end of the day, both cars had run a high 1:31, and were 2 tenths off of each other. Pole from last year was a 1:31.00 so we are pretty damn close, especially considering our low RPM limit! So, three’s a charm and we’ll see you in 2 weeks at Mosport!