The Roadster Finally Gets It’s Chance 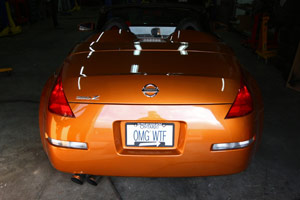 After 3 years of sitting pretty at SG, the roadster is finally going to strap on a trailer and journey out for it’s first time since coming from California. I’ve been saying I was going to do it forever. Make it a drift car. It’s been getting to the point where no one believed it would ever get done. Thankfully we are proving them wrong! Let me go over with you what is in my mind the best “just for fun” drift car in existence.

A just for fun drift car must be comfortable and good looking. The roadster has it’s full interior and a clean exterior, the car has only 1500miles! I’m missing a few interior pieces, but those will come eventually.

Since the car didn’t come with a drum assembly for the e-brake, and finding all the parts is near impossible, we decided to install a hydro e-brake. Keeping it clean and street-car-ish, the bracket holding the hydro brake is tucked under the carpet, as are the lines. The handle is perfectly in reach of the driver, just off to the right of the steering wheel. Only after testing I’ll know whether or not the placement is as good as it feels now. I must say that it takes almost no effort to lock the tires and it’s making the SG Testing Grounds way too fun. Dangerously fun.

Of course to go drifting you absolutely need a good differential. That’s in my mind the most important part of a drift car. So rather than spending over a thousand dollars on a nice clutch type, I traded a customer an open diff and welded the shit out of it. Fun drift cars are cheap drift cars. Second to a diff is steering angle. Some Tein inner tie rods and SPL outers, modified steering stops and wheel spacers means there’s a bit more steering than stock. Most likely not enough for reverse entries, but I’m hoping enough plenty of fun.

We can’t forget others in this quicky build of a drift car. We must have two bucket seats and harnesses. Thankfully I had some expired harnesses and the passenger seat is actually my old S14 race seat, and the driver seat is an even older red Bride ZETA II that I bought from a friend on the cheap. Now we’re equally safe in a roofless car. If we roll you better duck!

Last but not least is horsepower and sound. What better place to showcase SG Longtube headers than with a lot of rev limiter. All the motor has is an intake, exhaust, OS clutch/flywheel and our headers. Haltech ECU for tuning and 290whp is the result. It’s no competition drift car, and it most likely won’t dump out tons of smoke. But I’ll take deafeningly loud roofless luxury sliding over a competition drift car any day! Hopefully the car works well and we have lots of fun sliding around this weekend 🙂