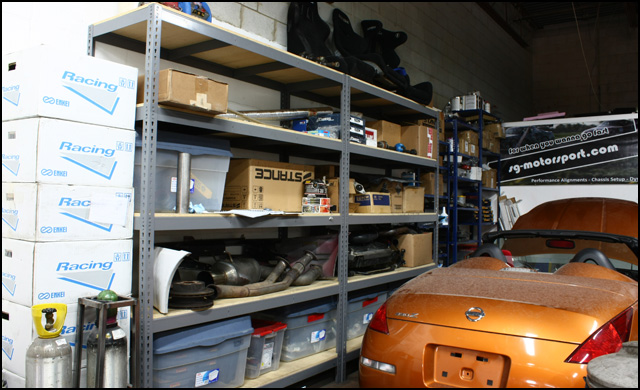 Just thought I would share a quick update with you all regarding what’s going on at SG. We’ve got a few projects we’re working on finishing up at the moment, and we’ve had a few quick in and out jobs recently as well. Of course being busy I didn’t have my camera out as much as I would have liked, but I’ve captured what’s going on in and around the shop today for the most part.

Freddy’s Skyline is getting some love, we did a custom fuel system in it with an Aeromotive pump and custom pickup, it’s also getting a HICAS delete bar and we’re doing it proper and removing the hicas lines from the entire car, as well as TC rods, front and rear upper arms for camber adjustment. We’ll now be able to adjust camber and toe all around as well as caster. Perfect!

Steve’s Subaru is getting a Perrin FMIC, which requires us to sadly remove the turbo and modify it as we can’t fit the required silicone elbow directly on the compressor outlet – we hit the drive by wire electronics and impeding failure is not something we really want. It’s also getting some new rear lateral links installed before it heads off for paint for the body kit install and color change! Silver cars really are the best to turn into race cars, it’s the perfect interior color.

Dan’s 240 is finally underway, we’ve got the exhaust all tacked up, and to be honest I didn’t touch a thing on the fabrication! Joe and Dave are masters in their own right and didn’t need a touch of help from me. I’ll weld the exhaust up though but I’m sure in the future I won’t even need to do that. The exhaust uses 3″ y-pipes off the headers into a 3-3.5″ Vibrant Y-pipe, and two Vibrant 3.5″ race mufflers. It’s going to be very, very loud. Amazing. We also fabbed up an intake for it, custom throttle cable bracket, mounting some odds and ends. Just the wiring that’s left now for the most part!

The #87 Genesis is getting some love. Trying to sort out the axle situation has left us resorting to going back to basics. Putting in a new subframe with diff bushings, and we’ll just change the large rubber subframe bushings for aluminum ones. Hopefully we can find a solution to this axle melting problem, as at $1200 per set of Axles, it gets ridiculously expensive ridiculously quickly. Also made a custom tool to measure initial torque of the LSD when it’s on the bench. It’s just a cut spline with a nut welded on 🙂

In Honda news, we just had an S2000 on the dyno for some AEM EMS tuning, it made a very respectable 215whp out of the 2.2L engine, with lots of J’s racing bits. Being that we’re not a Honda shop we’ve done a fair bit of Honda tuning, with ENMO’s recent twin charged civic, the VMC Speed World Challenge / CTCC car, Andrew’s Time Attack S2K and a few Hondata K-Pros, so crazy!

Some new racking from ULINE has helped us nicely clean up and organize the shop, and of course, more is on the way!