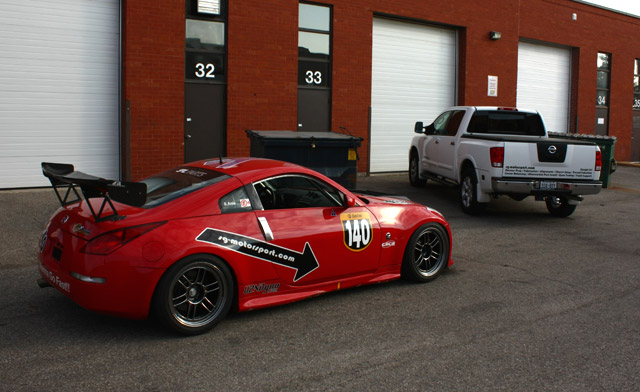 Well it’s been a while since I’ve discussed what we’ve been doing in our actual day to day life at SG, so here is some coverage of last week. We are working to complete Steve’s STi widebody overfenders, it has Seibon front fenders and should look pretty good once it’s all done. It’s going to be a nice dark green with black 18×9.5″ RPF1’s all around. Should be pretty sex.

Brian’s R32 GT-R is coming along, almost ready for the dyno. We just finished this mid-pipe for it, it’s missing brake calipers and rotors (if you have any R32 GT-R brakes for sale email me!), and it needs some seats. Otherwise it’ll be ready for the body shop!

Speaking of Skylines, we had an R32 GT-R in for dyno tuning that had a couple big turbos on and a built engine. While it looks relatively stock minus the R33 wheels, it has the potential to make BIG power! We stopped at 18psi which made 430whp, sounds great right up to 8000rpm! He’s going to drive it around like this for a while, and then come back for more boost and maybe some cam timing adjustment.

We did a lot of S14 tuning this week as well, with Marco bringing his car in for an alignment before CSCS, Paul’s S14 drift car prep – we did a full inspection on the car, corner balancing and alignment, as well as boost leak test and dyno tuning with the Power FC. The car put down a healthy 330whp at 16.5psi! He was running at CSCS as well and seemed to have a great time. Car worked well and he was really enjoying the setup – and of course – the power!

We did an install and tuning for Modified Magazine as well, trying the new AEM Version 2 ECU. The improvements over the older style ECU are incredible. I love the interface and tuning a 4D map with TPS vs RPM multiplied by Manifold Pressure was awesome. The car had incredible throttle response and the AFRs during cruising were incredibly spot on once tuned, and the fueling in boost stayed incredibly constant as you changed boost pressures. A USB connection means no more blue screen of death too! Jake’s car also got a harness install, wired in the AEM Map and AIT sensors, an HKS intake larger injectors and the AEM trigger disc install.

Dave Pratte came by quickly for a quick few pulls. He put a new ignition system in the RX-8 in an attempt to fix the lack of top end power. I didn’t think it was going to fix the problem. Engine sounded too smooth to be losing spark up top. Sadly, I was right and the car is still lacking top end power!

Just to prove we’re not all about Nissans even further, we did some Subaru and NSX tuning, corner balance and aligning both vehicles. The NSX has blown rear dampers, so JIC will rebuild them and we will hopefully be helping the driver go quicker at the track with it. Great cars.

I had to give Kels some love after the rear mid-link broke. Dave repaired the arms and replaced the prototype Heim Joints with SPL’s tried and tested rod ends. An alignment, corner balancing and removing about 5lbs of grass and dirt from the chassis (no exaggeration) and we were just about ready for the CSCS Time Attack. The goal would be a 1:15 after doing a 1:16.6 last time out.

What’s the last peice of the puzzle you ask? New tires! Well, new to me anyways. Dunlop Racing Slicks, 285/650/18. They are wider and with a blockier shoulder than the Advans. Flush much?

And finally, got the Titan stickered up to promote SG! I think the tailgate decals turned out well, and help give anyone with interest behind me some incentive to check out the website.

I won’t give away what happened at CSCS, but I will say that it was awesome. Pictures of the event to come, along with video and a full story! If you’ve seen anything in this blog that you’d like to have done to your car, just shoot us a message and we would be happy to take care of you!