SEMA Coverage (what you DON’T hear about) + Licence Plate Frames Are In! 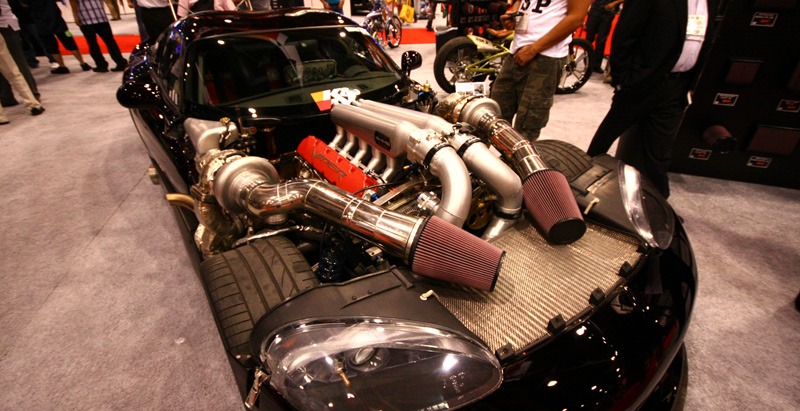 We’ve just picked up the new SG license plate frames,  so if you’re in the area be sure to come by and pick some up! They are free for all existing SG customers, or $8 for a pair for soon-to-be SG Customers.

Outside was bigger than any Canadian car show you'll ever see. Outside is about 10% of SEMA.

We’ve been busy since returning from SEMA and I haven’t gotten around to doing the coverage of it – but I wanted to go over the show with you guys – from another perspective. A perspective that is likely different from any you’ve read about on the internet. Glamour and hype aside, let’s look at the show from an industry standpoint. Now – I’ve never been there before so it doesn’t give me much to go on, but how closely it reminded me of ImportFest or some other slut infested attention whorish gross bodykit car show was scary. There were an incredible number of people who seemed to be there more to just see the cars than to actually do business. I thought it was a trade show?

I’m not saying everyone should be walking around with suits and ties, but tropical t-shirts and flip flops?

None of that bothered me worth mentioning. Certainly not enough to make a blog post about. The show was huge, incredible and there were some amazing cars. Lot’s of big companies were there showing off incredible works of fabrication, intelligence and craftsmanship. A few small companies too, with some really neat products. But – in between all of that, lay a giant ocean of diseased insect infested horseshit. Absolute garbage. Almost all of it made off-shore. And you know what?

Most badass Merc ever. This thing was built off of a brand new CLK55 (or something), but had all the old bodywork and interior. Looked amazing.

These companies had the biggest booths! It’s clear who’s doing well in this industry and who’s not when you go to SEMA. And there were a sickening amount of asian companies willing to do things for cents on the dollar if you just approach them and talk to the kind lady sitting on the cheapy plastic fold up chair, with her laptop connected straight to the other side of the world. There were no elegant displays or even any attempt to seem legitimate. It was almost like they should hang up a sign that read “sell your soul here.” Just some metal racks with junk knock off parts sitting around. Maybe a banner describing how amazing their knock off shit is and some funny engrish on the title. The nicer ones at least put some table cloths over the tables to look a little more classy.

Check out this dude's business name!

Hi, can you tell me about your turbo? Oh, it's a wheel that designed to spin? That's all you know about it? Cool!

These couplers looked harder than plastic.

BRO! These coilovers are RACE PROVEN! They have won races on the moon!

But those companies seem to be the gateway to making money. Their huge warehouses pump out products for next to no money, that can then be marked up 150% and 100% once more – how can you go wrong? Brand it as your own – sell it as something it’s not, pretend you’ve done real r&d testing and voila. A premium product for a bargain price. The companies that have sold their soul to the other side of the world are the companies that are flourishing in our current marketplace.

We could discuss who’s to blame for this state of affairs. We could blame the consumer for not knowing any better, or the companies for knocking off hard working companies that did REAL research and development and employed people at a humane hourly rate. We could blame the distribution network in aftermarket parts for accepting these products and pushing them on consumers – even selling them as equals to the original. We could blame our countries importation laws for not being stringent enough with import duties. But really it doesn’t matter. It is what it is!

So embrace your half magnetic stainless steel, your shoddy tig welds and your $500 coilovers that are sure to blow up if the temperature drops below 7 degrees. Because it’s going to be all you can get soon!!

This Viper had all the right stuff. Real race harness, Moton triples, it was quite bad ass.