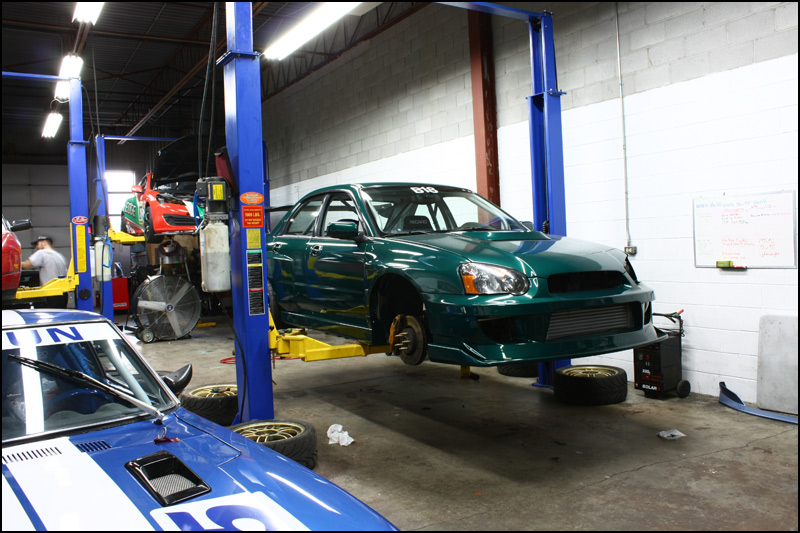 Well we’re off to Vegas for the 2010 show, and before leave I thought I would wrap up what’s happened since. Forgive me because the picture taking has been a little bit slack so this post won’t have a ton of pictures.

In the last few weeks we’ve finished Steve’s Subaru STi for paint and took it to the booth to spray it. The color is Lotus Racing Green, and it looks bad fucking ass! We’re just installing ARP 3″ Wheel Studs so that we can fit some spacers on the car to clear the new Enkei RPF1’s. They are a custom 18×9.5 size for the 5×100 Subaru.

We’ve got a 2.0L 4cyl for the Genesis coupe that we’re looking at to develop some ideas with how to move forward for next season in Canadian Touring Car. We’ll be forced to use the smaller engine, but will hopefully be allowed a turbo upgrade.

We just did a turbo upgrade on Roland’s S14 – going to a GT2860 (One size smaller than the GT2871R), and the spool and response of this turbo was incredible. Roughly 600rpm earlier spool, 300lb-ft of torque pretty much from 3000rpm onwards, and enough flow to make 300whp at 15.5psi. The compressor will start to run out of steam and choke up the system at higher boost pressures / higher rpm, but for a street car I now feel like this is the perfect setup. Since most street car guys spend all of their time around 4000-5500rpm, that’s really where we should focus on making power. The response of this turbo means that even at 3000rpm when you get on it the car gets up and goes – unlike a 2871 where you really have to wait a few seconds before you feel much of anything.

We did some work on a Lexus GS400 and it reminded me how much I’d really like to build one into a drift car. Maybe I’ll sell the roadster and put an LS1 into a GS and make a sweet VIP drift car. Just too much money!

We did an UpRev ECU flash on Ryan’s 350z, which was a non-revup with boltons and it made a surprising amount of power for what it was. After the flash we finished out at 252whp, which is about 10whp more than I would have expected! The test pipes really make a difference, but at the expense of the environment.

I have been meaning for a while to re-try the “revup” lower intake manifold on the Z. Previously it didn’t make sense to run it, since the RPM limit was 7200, and the revup plenum didn’t start to make more power than the earlier version until about 6800. The losses at lower RPM were huge, but I thought that now revving to 8000rpm it might just pay itself off. We dyno’d it and, to be honest, I don’t think it would be faster unless I had a sequential gearbox, but I left it in there anyways. You can see the revup gains 6whp, but loses significant mid-range power.

I was lucky enough to get my Z out for one more session before the season ended, my first time at Shannonville Long track this year. My best time at the end of last year was a 1:53.3, and I made a hopeful dream of cracking into the 1:49s for 2010. That was based on the thought that I would have done much more aero, and much more weight reduction, so for my day at SMP I was going for a 1:51, maybe a high 1:50.  With the revup intake manifold installed it meant spinning the engine right up to 8000, sometimes 8100rpm so that when the next gear engaged it would still be up in the power!

The guys at KPlayground were awesome, and as last year let me have the track to myself for the first 6 minutes of the day for a minor fee. That was great and all, except for the fact that these would be my first laps at SMP since last year, and I hadn’t had a few laps to make sure the setup of the car was where it needed to be, and that there were no weird issues going on. Knowing that in a 2min lap there was no way I would get a clean lap with all the lapping day cars that were out there, I was optimistic that the Cayuga setup from CSCS would be pretty spot on for Shannonville. Basically – these were the only 3 clean laps I would get. That being said, the first one would have to be enough to figure out how late I could brake and how much grip was out there, the second a hard lap, and the third – if all went well, a 100% attack.

The warm up lap got me up to speed quickly, save for a few braking zones and one or two corners I was pretty close to full ripping. Lap one was a smooth but gentle lap, focusing more on hitting my marks than pushing the braking zones. Come by the start finish and what does the dash show? I figured a high 1:51. Nope, 1:50.626! Awesome. Already exceeded my goal! Lap two was a little harder, but messed up a few high speed corners by pushing wide. Result? 1:50.304. I knew there was more in it, and – reminiscent of Cayuga – I WANTED that 1:49. I pushed hard, but wasn’t stupid. I actually left more in reserve on this lap than I thought, since it’s easy to make a mistake that costs a lot of time at Shannonville, and there isn’t a whole lot to gain. Except in the brakes. So that’s where I did it. I don’t think I’ve ever braked as late going into the corner after the back straight, but the cornering speed and grip is so high now that it doesn’t take much to slow the thing down. 200km/h to a turn in speed of 137km/h in just 1.7 seconds. Average deceleration of 1.1g’s and peak braking of 1.2g’s. That’s about as fast as you can jab the brake pedal, blip the throttle, grab the next lower gear and turn in. Lap time? Did we do a 1:49. Absolutely. It was an awesome end to the season. Not quite as much hype as CSCS, but way more satisfying for myself personally. Shannonville was the track I first went to when I was 15, and the track I first drove. It certainly has a special place in my mind and I really enjoy its technical, complex long lap. It has a bit of everything. Bumpy brake zones, smooth brake zones, smooth, simple corners you try to perfect, fast kinks and chicanes, and messed up reducing radius bumpy corners that force you to try new and unorthadox methods to find time. All in one lap. So it’s very difficult to be bang on consistent compared to a track like TMP or Mosport. Love that place!

And that’s about all I’ve got for you today. We’re off to SEMA so be good while we’re gone, and send us an email if there’s anything you’d like some info on – we’ll look into it while down there.