Pat’s FR-S was a bit of a challenge because it is one of the first full racecar FRS’s out there still running the factory engine and ECU. With some of the electronics and modules removed from the car, plus the fact that this is a pre-production chassis, there was a lot of work to get the engine to run in anything other than limp mode! ECUTek has been extremely helpful in working through the issues and I’m happy to report Pat’s car is now making great power! The process has helped us really understand how the factory ECU works, what it needs to run without trouble and how to get around certain issues.

The engine responding incredibly to boost, doubling the factory power at just over 15 pounds of charge pressure. The turbo selection was great, if a little on the large side. At first we deemed the turbo to be way too big, as the first time we tuned the engine the cam timing was not working (one of the bugs we had to work out!) – The turbo was spooling at something like 4600rpm. What a difference cam timing makes. I’ve been preaching this for years but it’s fun to have a graph to compare it (an entire article about cam timing will follow). With the cam control working the engine is spooling the turbo as early as 3200rpm and the thing is fully up to pressure by 4000. The difference is ridiculous.

With just meth and 94 pump the engine made as high as 390whp, but I took some timing and added some fuel so that we have some margin of safety with the factory high compression engine (don’t forget this thing is a 12.5:1 motor!). The question now is how long the rods will last with 300lb-ft of torque beating down on them.

All in all I am really happy with how the ECUTek is controlling Pat’s car and look forward to doing many more forced induction FR-S/BRZ’s. One of the main reason we don’t do more Hyundai Genesis coupe’s is simply because there is not a good engine control solution out there – most guys don’t want to put the money up for a Haltech. The FR-S is an awesome car out of the box – with 250-300whp (380 is excessive), this is one hard to beat sports car!

Good luck out there at DMCC this weekend Pat, make us proud and take home some prize money! 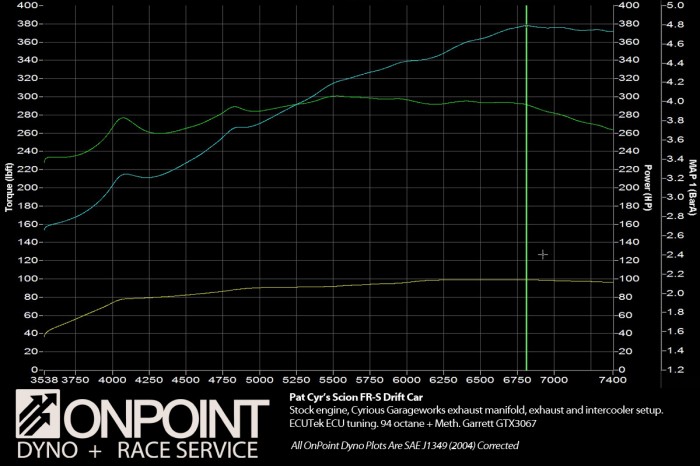 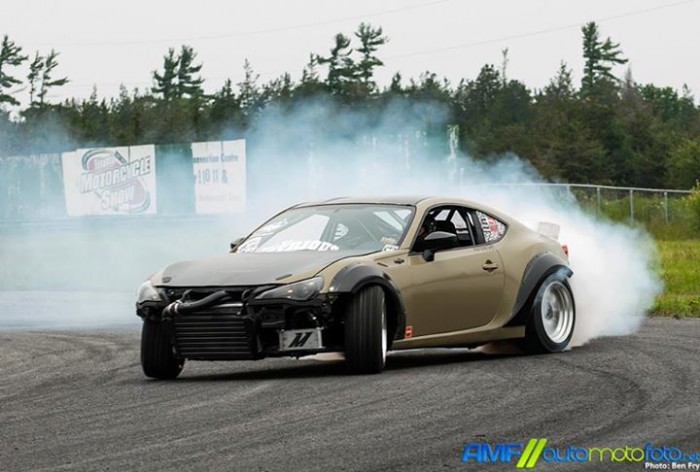 Here’s a video of the car from the wall at Shannonville – no problem roasting 4th gear.