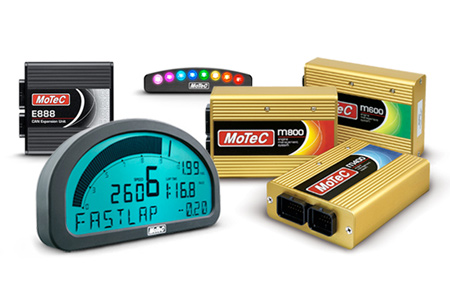 In 2008 I had the fortune to find a professionally built 350z Grand-Am car for sale at a steal, and purchased it. That was when I fell in love with Motec’s products. Over the last 6 years I have developed a great deal of experience with Motec products through the development of Kels, and through tuning other Motec equipped vehicles and while supporting teams with Motec hardware. It was only natural then, with OnPoint offering motorsport level services and dyno tuning, that we should invest the time and energy into becoming a Motec dealer. So I went down to Motec East for a week of training.

If you’re not familiar with Motec, these are the guys that make pro level motorsport ECU’s and Data Loggers for the highest level of Motorsport. When someone asks why a Motec, it’s very difficult to give an answer because there are a lot of great Data Logger’s and ECUs out there already at a lower price point. To know why you want a Motec, you almost need to have first been limited by a competitor’s product. I have used Racepak and AIM dashes, and while I do very much like AIM’s MXL dash, what you can do with an AIM compared to what you can do with a Motec SDL/ADL (or now the new color displays) cannot be compared. Motec’s products have always been designed to allow the end-user to configure whatever he could imagine, while having a relatively simple to use interface.

All Motec products can have custom programmed CAN messages as well. If you’re not familiar with CAN, think of it like a network for your car. Rather than having to have each sensor running to both the ECU and the dash, which would make for an incredibly complicated wiring harness, or many redundant sensors, the units on the CAN network will communicate with one another and share things like sensor values and input requests. Being able to custom transmit and receive CAN messages allows integration with factory cars and other loggers alike.

Motec has shown how powerful this is with their M1 plug-in ECUs for the FRS and GT-R which are able to communicate with all of the OEM systems in the car over the CAN network.

Motec also offers power distribution modules which can join the CAN network, receive all of the data that either the dash or the ECU know about, and then control your vehicle’s electrical system. The PDM eliminates the necessity to have fuses, or circuit breakers, relays as well as most switches. Like all Motec products, it can be configured in any imaginable way. The PDM can be configured to automatically retry a circuit that has exceeded its current (load) limit, so it may get you to the finish when a fuse would have popped and disabled the car. The PDM can also transmit the current draw and voltage of each circuit to your data logger. This effectively allows you to log and monitor the health of each individual electrical circuit and catch problems before they take you out of a race.

One of the reasons why it’s a great time to join Motec is that they have recently released entry level products like the M84 ECU and C125 Data Logger, which allow club level racers to get into this kind of functionality for a fraction of the price of what it used to cost. If you’ve always put off Motec as being out of your league, it’s time to reconsider. Certainly if you’re doing anything outside of the box, like using multiple types of fuels, complicated boost control, meth injection – a Motec product will control your vehicle better than anything else out there.

And when it comes to data analysis, nothing beats Motec’s i2 software. Once you use it you’ll never want to look at anything else. I know, because we had AIM in our Genesis Coupe’s and Motec in the Z.

Contact us if you’re interested in getting a price quote for any Motec products for your vehicle, or if you’d like more information on what sorts of things a Motec can do that competitor products cannot.