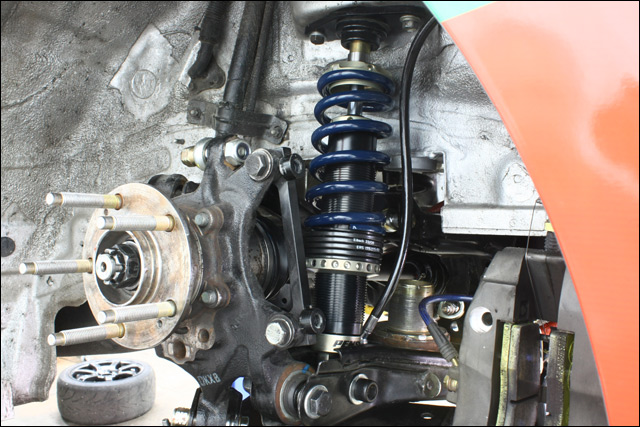 Well we got the Penske’s in the rear of the #87  car for some testing, with much higher rear spring rates. We also changed the subframe to an OEM one, the only change being that I had some subframe bushings machined out of aluminum. Having these terrible axle problems we needed a fix, and we needed one fast, so we decided to go back to basics. Get the stock components in the car, rebuild the axles with Redline CV2 axle grease and cross our fingers!

Early this morning we were off to the Driver Development track at Mosport to see #1 if the axles would be able to hold up, and #2 to make sure the suspension doesn’t have any major issues, and if we’re lucky #3 get to tune on it a bit and see if we can’t get a badass setup in the car.

Our first session out was pretty promising, although the car was way too loose on throttle. Took the rear bar off entirely and it was understeer everywhere, but awesome on throttle. At least we now have the tools to make real balance adjustments to the car. With some playing around I found a setup that appears to be 90% of the way there. The car turns in great and rotates pretty well, puts the power down nicely with just a mild slide in 2nd gear, but does have some absolute mid-corner push. I believe this is due to excessive preload in the diff, but I won’t be able to take the diff out and re-stack the discs until after our next race this coming weekend in Quebec. Because DDT is so slow, there’s really only one left hand kink (the direction we were running in), which is flat in these cars – so it’s hard to tell what the balance is like at speed, but my best guess is it will translate into aero understeer rather quickly!

The car had way too much rear brake bias as well (and way too much pedal effort), so I swapped the brake master cylinders for some smaller ones, specifically in the front. Previously it had a larger master in the front than the rear, despite having overly large rear brakes. Needless to say, the car had like 40% front brakes before!!!! Even with the new masters I’m finding the balance bar needs to be almost full front, I had a few interesting adventures today on the track while there was still too much rear 🙂 Video to come, let’s just say that no cameras can take hitting a pylon like a GoPro!

Even after running session after session and getting the drivetrain nice and hot, the axles never got above 70C. Really good considering after a race we were seeing over 200C! Hopefully we’ve found the fix. If not, I’m going to shit. Everywhere.

Really nice to see the car starting to run reliably now, I hope this trend continues. Car was literally turn key all day, and it felt awesome to be able to just tune on it and not have to be fixing any fucking problems!

If you’re in Montreal this weekend, come by ICAR to watch our races. God I hope it doesn’t rain, still no idea on the setup for the rain and quite frankly I don’t think we’ll ever get very close with how sticky all the rear sphericals are.

And as always, here’s a quick video I put together: