Kels At Mosport And Back Into The 27’s 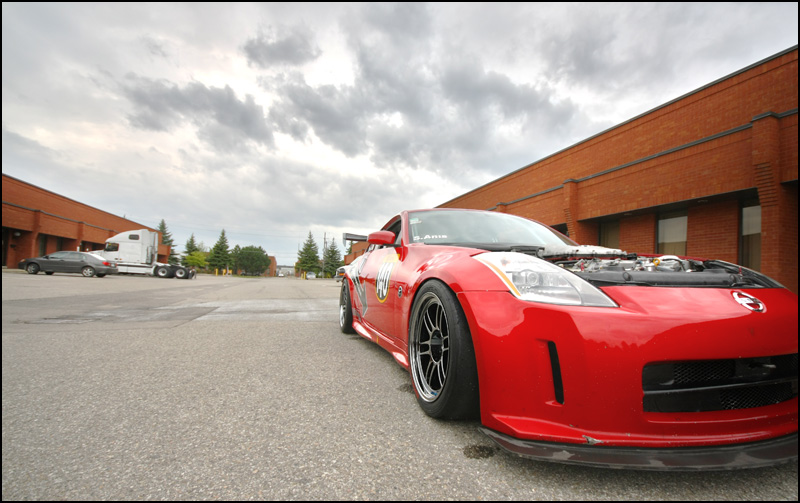 What a horrible and great day it was at Mosport. I haven’t had my Z out at all this year as we’ve been so busy with the Genesis coupes, so the car felt pretty neglected. We had a few weeks off in touring car so I decided to get my car back together, even if we hadn’t finished all the development I had hoped for over the winter.

Put the built engine back in, filled it up with race fuel and got it on the dyno. Ended up losing part of the wiring harness somehow even though everything was in bins, so I had to build a new subharness. It came out sick. But it was a lot of wasted time. Just can’t beat raychem DR-25 and DT connectors. The labeling with clear shrink is icing on the cake. Anyways, on the dyno 324whp was what she put down with the stock intake, which is 12 or so higher than last year. Cool. The real difference would be the slicks, going to 18×10.5 inch wheels all around rather than 17s, and REAL slicks. Ok, they are 5 years old, but they are still real slicks!

On the way to the track the jeep’s power steering pump literally exploded, I lost all of the power steering. On this particular jeep that means you lose the radiator fan as well, since it is driven hydraulically. Fantastic. So after the power steering fluid almost lights us on fire, we finally arrive at the track. I swap 2 of the old Yokohama slicks out for Michelins since one Yok had a puncture. Fuck. So it would be left side Yokohama Advan 280/650/18s, and one side Michelin 27/65/18s. On paper close to the same size, but in reality the Michelin was taller and narrower.

Looking at the data the engine oil temp was going through the roof, but this was my first year the oil temp sensor was actually working. It’s been on the list of things to do since forever, but of course it’s never gotten done. Until now. With a built engine. And no base to compare to! 280 degrees F and climbing after a few laps, that’s not scary at all.

Car was flying though. It was my first time on slicks, and my first time driving my car in almost a year. I must say the pedals feel so much shittier than the Genesis which has a real racing pedal box. Harder to heel-toe, and the knockback drives me nuts. (knockback is the brake pedal having no pressure because the wheel bearing flexing pushes the pad back, so you have to re-seat the pad before you have any brakes!!!) It’s fucked up when you’re flying up the hill towards corner 5 and have no brakes.

There was a ton of traffic so I couldn’t do much more than a few corners, you had to wait for a wave by so it wasn’t a free for all, and maybe that was for the best. I was driving horribly, super tired and out of it, not the best time to be going the fastest you’ve ever gone around Mosport!

Anyways. Car was ripping, the one clean lap I did turned a 1:27.100. Which is faster than my 240 ever went by about 0.3 seconds. And it was like 30 + degrees with the sun out. My back straight speed was substantially lower than the time I did last year, and I have more hp this year! Shows how much temperature and specifically track temperature really matters.

So as everything was going well we decided to pack up early to get home at a decent hour. But of course that can’t be. We had the Jeep issue to resolve. The plan was to get a shorter belt that would not use the power steering pump, and drive at highway speeds everywhere so the thing didn’t overheat. Well we got two belts that we measured to be the right size, but it turned out the largest belt we got was still a hair too short. So lacking the time to go back to Canadian tire (1hr round trip from the track) I just started driving in the general direction of home. Maybe the power steering pump would be ok, it just had to free wheel. And we did make it pretty far. About 1hr into the drive on the 407 however I started to smell smoke. Fuck. Should pull over. I don’t have a fire extinguisher on-board either, so that’s a bit scary. Open the hood and the pulley has gotten so hot that it’s literally smoking. All of the residue oil around the pump is burning up and smoking. I lightly poured water on the pulley more for fun than for any other reason, and it took 2 bottles before it stopped sizzling on contact. Pretty amazing really. Started the engine and at this point the pulley was so ruined there was no way I could drive the vehicle any substantial difference. Pulled off the highway, ditched the truck and had someone come pick me and the trailer up a few hours later. Not so bad. I ended up getting the truck the next morning with the correct sized belt and made it back to the shop with no power steering. Gotta love it!

Don’t forget we’re doing alignments and corner balancing for all types of cars, so if you want to get a setup in your car similar to Kels it can be arranged. Or engine development and dyno tuning. I can’t wait to do another race car build, hopefully build something for a customer who wants to go REALLY REALLY fast. Like ALMS fast.