I had the pleasure of tuning a Haltech PnP equipped Genesis last week at Centerline. The boys at Centerline did great fab work, with a tubular manifold, external gate, intercooler piping, catch can and coolant overflow and a few other details.

Unfortunately Haltech seems to have a small quirk with the ECU – Canadian cars need to select “Push button start” instead of “Key start” (even if it is a key start equipped car) or the injectors will not pulse during cranking. Once we finally sorted that out the engine started and ran great.

The car tuned well except for one relatively major problem – the wastegate wasn’t opening! Thankfully I always tune with the boost cut set 2psi above target boost pressure, so the fast spooling turbo didn’t have a chance to damage the engine. Even though Joey had already installed a softer spring in the gate, the attached documentation with his wastegate was not even close (for our particular application) to the true gate crack pressure. We ended up putting a 10psi spring in which resulted in 15psi of actual gate crack pressure.

After tuning the fuel, cams and ignition timing, the car made 390whp on pump 91 at 21 pounds of  boost. With a meth kit I’m sure the car would be north of 430whp. 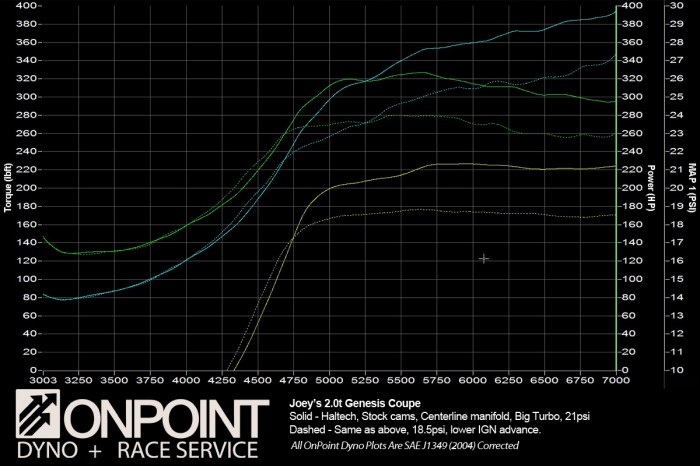