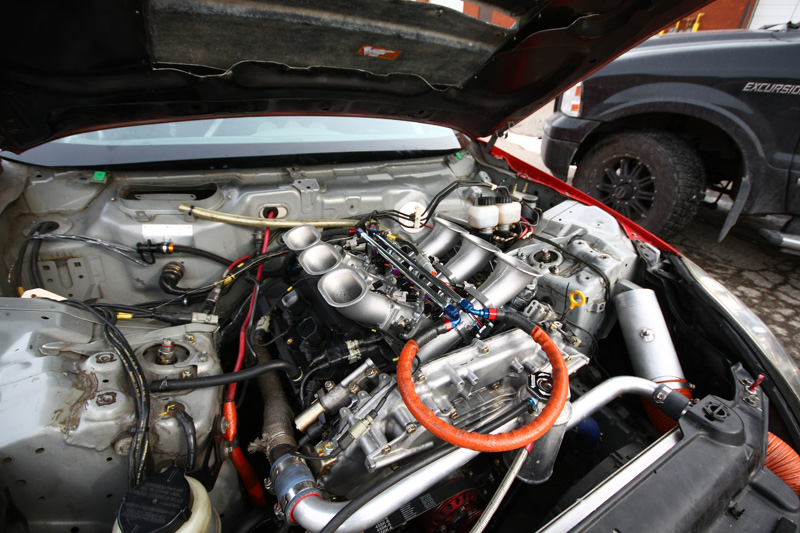 I have yet to post the ITB story, but let me tell you it was an adventure.

The shop was pretty much empty at the point when I got all of the parts for install, so I was really hoping for a bolt-on affair. Unfortunately, Jenvey was back-ordered on some linkage parts and knowing that time was tight – I told them to just ship what they had. You can imagine this caused the installation to be a little bit less of a “bolt-on” affair.

Let me take a moment to teach you all something about ITBs. It’s called air balancing:

It’s very simple. All cylinders need to have the EXACT same throttle plate opening, or else the engine will simply not run. Some cylinders will be choking on fuel, while some will be popping and missing full lean. Air balancing is usually set at idle, and then it is assumed that the throttles will all evenly open from there.

The ITBs installed with relative ease, except for the fact that Jenvey has extremely tight tolerances in their parts, tighter than anything I’ve ever seen before – and threading the manifolds into the heads was a little bit difficult. Everything else was a complete dream, and the Injector Dynamics adapters I ordered fit perfectly, as did the wiring PnP connectors. The fuel system was honestly too easy, I think I had it done in an hour including making new hoses for the complete setup, minus the front cross-over which I just re-used an old -6 hose to get it running.

Everything was together – except for the linkage that connected both banks. This is where the problem was (and the missing parts). Normally there is a wire and throttle guides that pull the throttles open exactly and evenly with each other. Fizzer and I had to scour an empty shop for some scrap aluminum, safety wire and tiny hardware to build our own little guides and ghetto up a little safety wire cross-over cable. And since there was no throttle cable (drive by wire before), we just made a safety wire pull cable to use as the throttle.

Surprisingly it started right up, but getting it to rev and run smooth was really tricky. We had to re-make the crossover linkage a few times, as the passenger bank wasn’t opening at the same rate as the driver bank, and even a small difference totally threw the engine out of whack. Even now at 20% throttle I have the left bank set something like 15% off from the right.

Then there was fizzer inside the car operating the clutch, while I was sitting beside the passenger fender pulling the throttle, operating the dyno. It was wild, fun, and loud. My ears were hurting for days, and of course right after the dyne session I found my ear muffs. The number 1 cylinder has this strange clicking noise, I’m fearing that there’s a bent valve or something not right.

Regardless, the thing made 372whp which was a big gain over the previous – although Gord Bush also ported the heads which made a large part of that power no doubt.

Anyways, here’s the video if you haven’t already seen it of the 372whp awesomeness, for some reason the torque is very erratic, I think because the engine is now so much less restricted so we’re seeing all sorts of resonance. But I also think with a little more tuning the engine will smooth out.

Anyways, the linkage parts arrived, as did some shorter trumpets that I have yet to try. Hopefully I can get it on the dyno before de-tuning the car to run in GT2 this year for some endurance races!