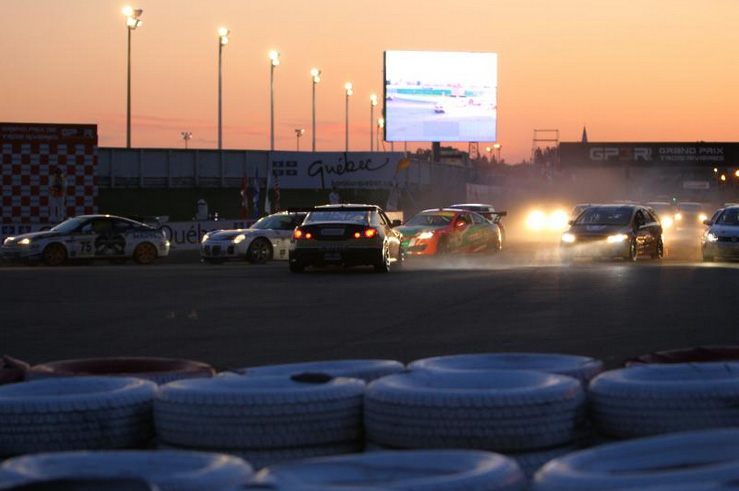 Well it was another wild weekend in Canadian Touring Car. This time around we were at my favorite event of the year, the Grand Prix de Trois Rivieres. It’s a street race that’s been going on for over forty years, and you can tell by the energy at the event. Every year I am more amazed with the fans and how passionate they are about racing, and every year the city closes down the main strip downtown for three nights of huge street parties. Since I’ve been to GP3R they have always had a feature friday night race as the sun goes down, watching glowing brake rotors and flaming exhausts around a packed audience on a Friday night is cool. Being in that race is even cooler.

It was also good for our turbo cars since they hate the heat, and GP3R is super hard on engines. I wasn’t in the greatest of spirits after practicing and qualifying poorly, but I was eager to get into the race to see if I couldn’t find more time with smoother, calmer driving. In practice and qualifying I just couldn’t seem to slow the car down enough for a lot of corners, yet at the same time I was coming off of the corners way too conservatively. I think that’s what I get for not exercising and getting my proper rest before the event. I figured once the race started I would get into a rhythm and smooth out.

To prep for our first night race we wired up the high beams and took the yellow film off of the headlights, bled the brakes and did a good checkover on the cars. GP3R is notoriously hard on brakes, and that’s really how we did well there last year. Handling isn’t very important since most of the corners are low speed point and shoot, so it comes down to braking and the ability to put power down more than absolute corner speed.

Photo Courtesy: Flagworld.com - This is why Quebec is cooler than Ontario.

Audette qualified first, and so he was leading the pack for the start of the race. Unfortunately for me he led the pack at such a low speed that 3rd gear was not the right one to start the race in. At all. Looking back I know I should have gone into 2nd, but at the time I figured the pack was going to accelerate before the green and I would be coming into the boost right in time. I was wrong. Instead we started and I was at 3000rpm. No boost. No power. Getting passed by everyone. Terrible.

Bob passed me. And then (either because he got hit or just trail braked too much), he spun in the middle of corner one. I avoided him and thank god – so did everyone else. But it was pretty god damn exciting! I think he made it back up to 5th by the end of the race which was pretty impressive.

As the sun went down and the darkness started creeping in I felt myself back in the days of ripping Toronto streets, the car was making good power and loving the cool air. I was right behind Borgeat trying to make up ground after my horrible start, dive bomb pass, locking rear tires, almost in the tire wall, no big deal. Next on the hunt was Nick Wittmer. He was driving one of the Fast Wheels Tiburons (which are actually getting pretty damn fast!) and I was able to make up tons of time on him through the two medium speed corners on the track. We were more or less matched in braking and power – at first. After a few laps of trying to hunt Nick I had an issue with the brakes – the pedal went soft on me and after I pumped it up the car had what felt like no front brakes. It felt like I was pulling the e-brake to stop and sliding into the corners. After adding a ton of front brake bias the car started to stop better, but I had lost way too much ground trying to figure out the problem and Nick was gone.

A few minutes later Boake went off the track – after boiling brake fluid and losing his brakes – so I moved into 3rd place. Audette and Wittmer infront, everyone else behind. Boake was making up a little  bit of time on me, but I knew he didn’t have enough time to catch me, so it was just a matter of cruising. On the last lap a full course yellow came out – PJ Gronke had gotten into an accident and rolled his VW on the back straight. It was fucking crazy! Apperently Boake narrowly avoided the wreck, walling his car and destroying his wing to miss putting his bumper in PJs upside down face.

What a wild race, the darkness, the loss of brake pressure, the crazy dive bomb passes that almost ended in disaster, avoiding Bob at the start, and then PJ flipping and sliding on his roof, all infront of a group of really passionate racing fans. Couldn’t have asked for a better race. Just wish we won.

We decided to do a water sprayer setup for the radiator early the next morning because the water temps were very high, even at night on Friday. We got the system setup and working awesome just in time, triggered by the ECU through a relay, which could also be switched off at the switchbox. Pretty cool huh? Yea. Except that it had a leak. And on the pace lap of the second race, water got on the ECU and just like that, our day was done. Trying to be clever in an attempt to solve a potential problem, I effectively took myself out of the race. Talk about frustrated. Bob’s car ran 110+ degrees C on the water and pushed over 2L out the radiator over the course of the race, but finished and the engine continues to run just fine.

On top of that, we would have won the race assuming we could have gotten around Nick, because Audette blew up (in a ball of flames by the way) towards the end of the race.

Just over a week until Montreal. What will be next?