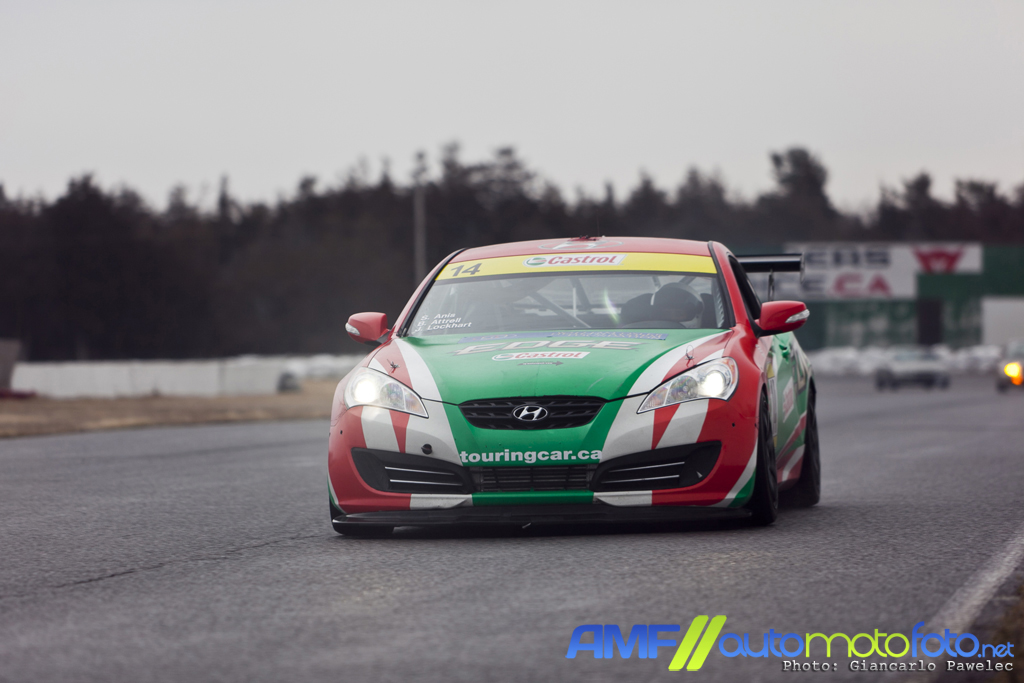 Although this post is arriving a week late, it doesn’t change the fact that we had a great test at Shannonville. Our new 2L engines were working perfectly. With one exception. We were using some 3″ orange “SCAT” duct hose for the intake. Which sounded like it would be a perfect product for the application – and we’ve seen it used on many other turbo inlets before. I guess the condition is that you need to have a blow off valve. The surging blew the pipe apart and some of the metal inner liner met the compressor wheel at speed. So a new compressor is on the way – at my personal expense!

So let me cover the good news. Mechanically everything was great, the only issues we had were some boost spiking from an overly excited boost controller, that will be tuned out for the next test session with the Haltech. The flat shifting also caused boost spike and resulted in hitting the boost cut, so we’ll need to solve that before using the flat shift feature. But it is quite fun to shift without lifting off of the throttle!

It was wet all day, which meant we didn’t get a time on ourselves in the dry, but the car was really flying in the wet on the new Continental rain tires. I couldn’t believe how amazing they were. I’ve actually never driven in the rain and enjoyed it before, but the car was making OVER 1G (1.1G approx) in the soaking wet. It was putting power down in 2nd gear no problem. What a great feeling that was!! It was also nice to know that our new electronics were holding up to the rain without issue. It was a stressful day though, with making sure so many new parts were working properly, on a tight time schedule, and being generally exhausted from working non stop for the past few weeks!

Unfortunately, it didn’t give us an idea of what our water or oil temps were going to be, but we have plans to open up more airflow to the radiator if it is required by modifying the upper grille. We’re thinking about going to a larger intercooler as well, as the air temp rise is a bit too high for my liking 🙂

Needless to say, we couldn’t have done it without the help of our crew and sponsors. While it’s just the first bit of 2011, it’s nice to know it’s off to a good start. Knowing that we will have a fighting chance in the rain means a hell of a lot too 🙂