CSCS Success – OnPoint Cars All Over The Podium

CSCS was a fun time. While I wasn’t competing in time attack, I had a great time watching all of the cars we have tuned in the last couple of months compete. The guys did great, and a number of our tuned cars ended up on the podium, some even winning their class.

The place was packed with spectators as usual, this time there were even spectators parking outside of the gate because the grounds at Cayuga were totally full. The guys at CanJam have really done a fantastic job putting these events on and focusing on what is so important – getting FANS and SPECTATORS to come to events. This way entry fees for competitors is super cheap, and event sponsors are much easier to come by.

So let’s look at some of the badass OnPoint tuned cars that competed at CSCS last weekend. Thanks to Charles Spivak for putting these pictures together for me and sending them over! 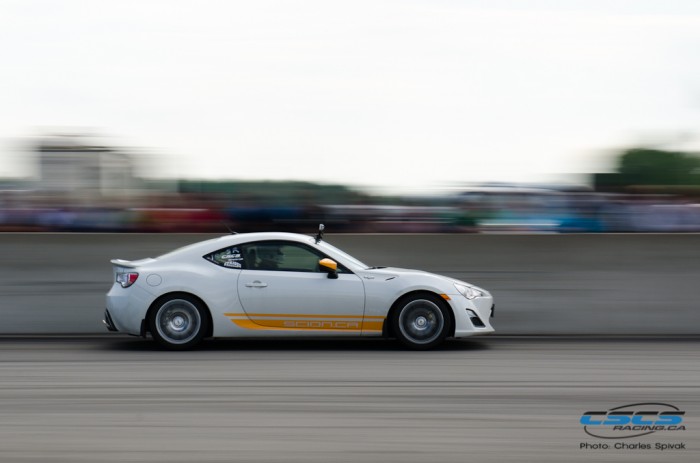 Vinh Pham’s Scion FR-S that Dave Pratte from Modified has been putting a lot of work into. Testing new AST dampers. This car has an ECUTek ECU tune by us and the thing was noticeably faster than a factory FR-S. Dave can really hustle the thing too, and is the TMP master – running this track for different tests for Autoguide and Modified magazine almost every week! Unfortunately the car is still very underpowered to win in Street RWD, but Dave put down an impressive time considering it’s only 180whp. 1:23.794 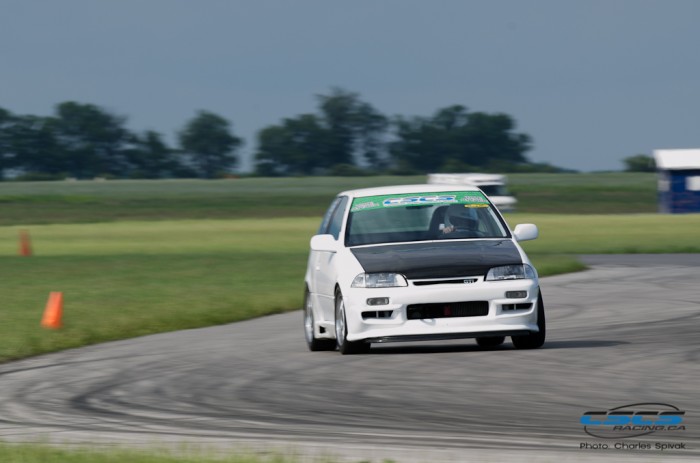 The little swift that could! Kevin Stittle’s Suzuki Swift, driven by brother (and my crew chief from last year) Andrew Stittle. This little thing has a Haltech Sprint 500, high comp pistons, large cams, a good header and intake, and sounds pretty cool. Its right between a motorcycle and a Honda. Super light, super quick. They are still setting the car up and the dampers need some work – but this car should be capable of a low 1:20 on R-compounds pretty soon! Andrew was 5th in class – there are some pretty fast FWD cars in Super Street FWD, but if Andrew can find another 2 seconds he will consistently be on the podium. 1:23.654 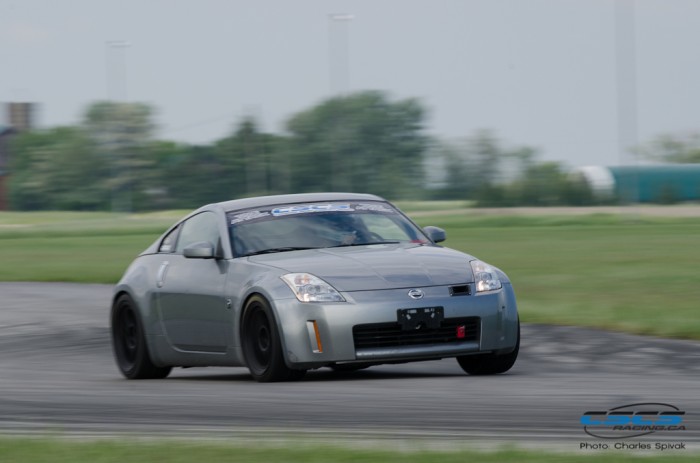 Patrick Ho’s car has a ton of power for how stock it is – I really couldn’t believe it the power it made considering the modifications. It sounded fantastic and Pat was doing a great job hustling the car. On street tires Pat put down a 1:22.560 which was good enough for 3rd in Street RWD 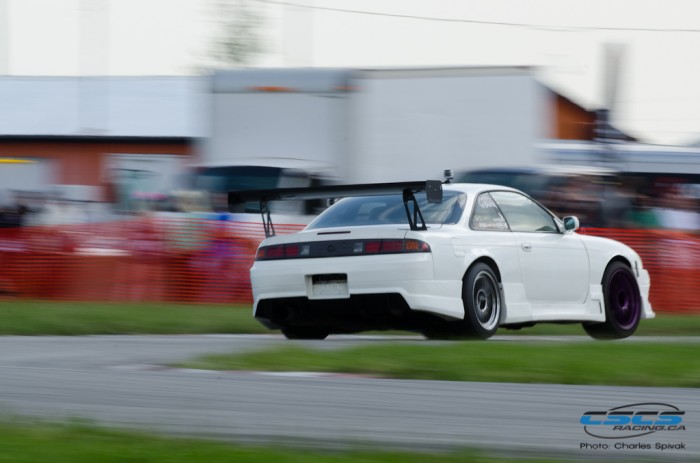 Vince’s S14 was hustling too. And he ended up winning Street RWD for it. Over the winter we had put some Grand-Am spec cams in his VQ along with JWT valve springs, Centerline longtube headers and an UpRev tune. The motor is making just shy of 290whp and in that chassis the S14 is working really well to put down a 1:21.266 on street tires. Congrats on the win Vince! 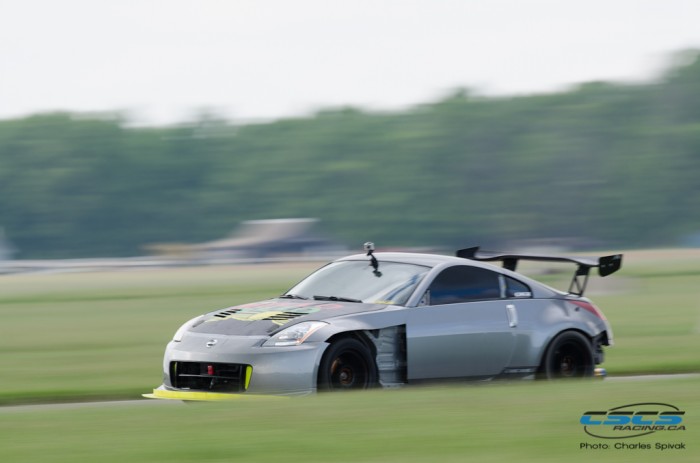 Mike Gardner’s Mello Yellow Days Of Thunder Fender Cut 350z has Kels’ old engine – making a healthy 325whp with an unfortunate 6600rpm rev limiter due to maxed out factory injectors. Despite being down 1000rpm of powerband Mike was still able to easily win Super Street RWD with a 1:20.190. I’m sure with more development and another 1000rpm the car will be capable of a 1:18 on R-Compounds. Congrats on the win Mike! 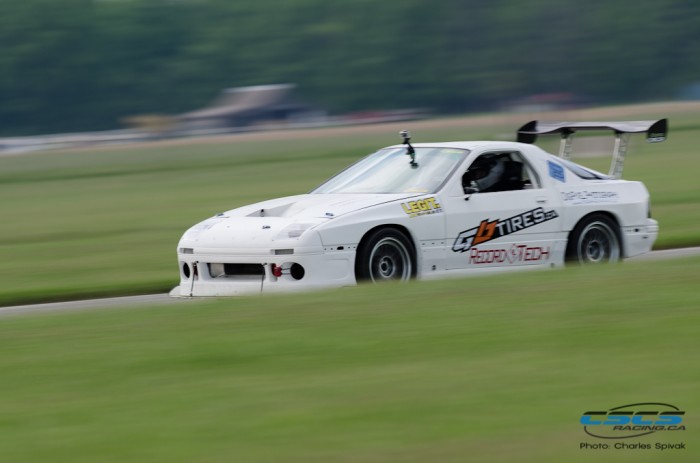 Andrew Cassidy’s FC RX-7 has undergone quite a bit of development work over the last few years and is starting to work really well. Last year we tuned Andrew’s car at a low boost setting – but this year with race fuel and more boost the car has a ton more power. Andrew’s main comment at this time is that the car has TOO much power! Despite the track being a half second or so slow he was able to put down a 1:18.671, which was just under a 10th of a second from capturing the Unlimited RWD win. I’m sure you’ll get Jim next time Andrew! Keep up the development and congrats on 2nd place. 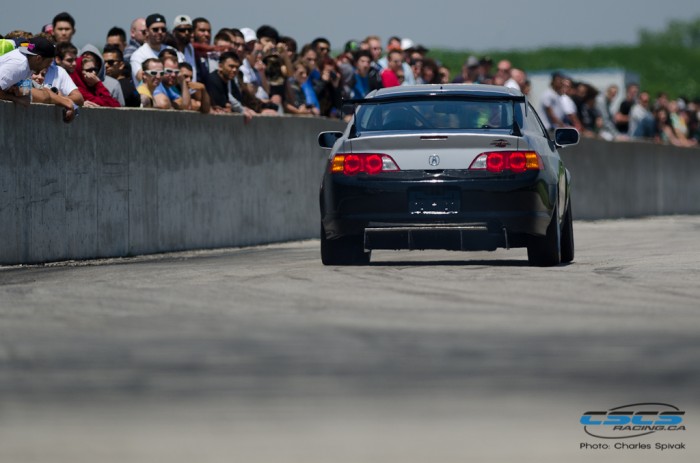 Will from Point Zero Autosound built himself a truly capable RSX racecar. The car has a Borg Warner EFR turbo and the powertrain setup is really responsive. With boost  by gear enabled the car looked really driveable out there, despite the huge amount of power for a FWD platform. Will tuned his own car on the OnPoint dyno so I can’t really take much credit for the tune – but it was great to see him out there almost putting down a lap record in Unlimited FWD. Congrats on the 1:16.999 Will! 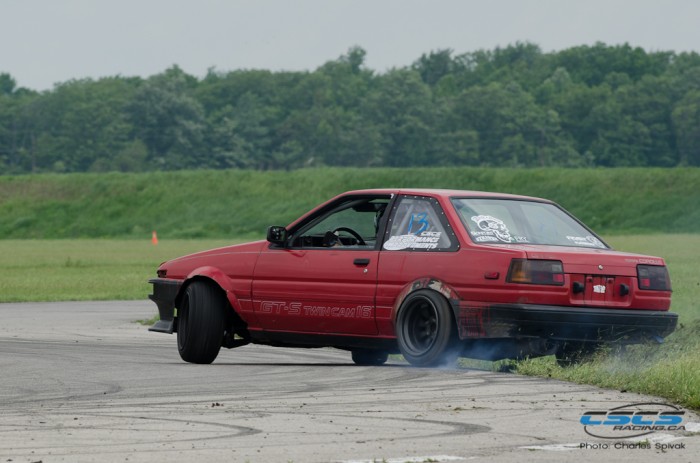 We can’t forget about drifting, where a number of OnPoint tuned customers were ripping it up. Jover has to have the most classic and old-school drift car of all time. With an OnPoint tuned S2000 motor in there, the thing makes just enough NA power to keep up with some of the heavier turbocharged cars, but you just cant beat the feel and sound of a tiny lightweight naturally aspirated drift car. Jover’s kicked back attitude makes the combination of car and driver that much better. Glad to see you out there ripping it up Jov! 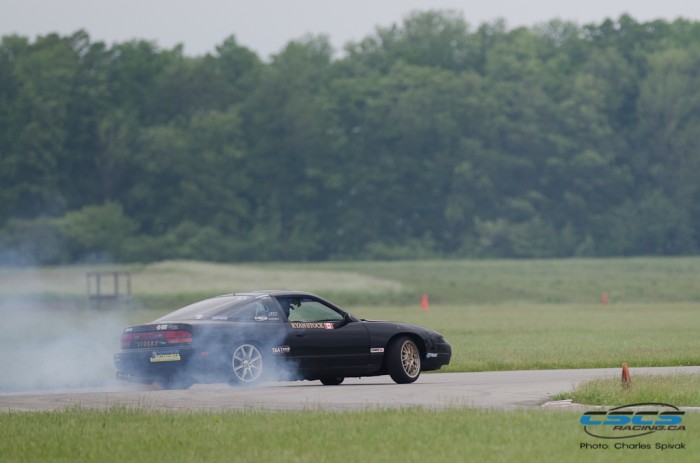 Ryan Stock’s S13 had a bit of bad luck at CSCS. There is some sort of electrical problem – possibly a MAP sensor dropping out. The engine wouldn’t start for Ryan after practice, so he wasn’t able to put in a qualifying run and thus was not able to run. The practice he did do was looking great and I’m sure he will get it sorted out and back for the win next event. 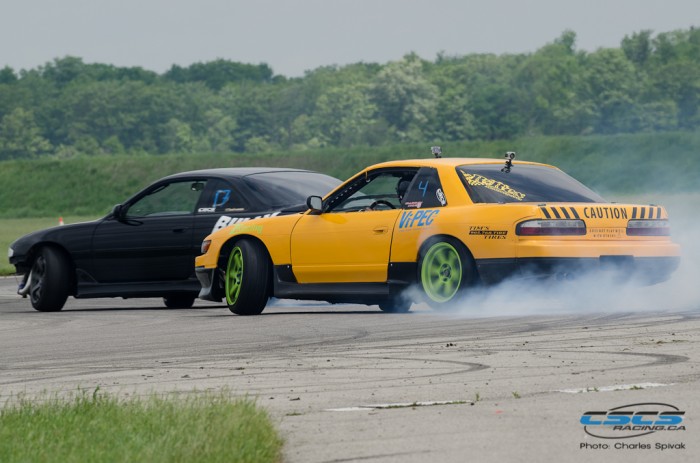 Brad’s ViPEC sponsored S13 was looking good all day long, making great power and a ton of tire smoke. He didn’t make it into the finals but he was right there. Good luck next time and keep up the good work Brad!

So that was CSCS Rd.1. A number of people were asking where the Z was, and when it was coming out. Well the HR build is under-way and once it’s together and tested I hope to have it out to run at CSCS by the end of the season. But the focus right now is getting it ready to run GT Challenge and Supercar. Besides, its almost more fun seeing all of you guys developing your cars and getting faster than it is to run my own car!