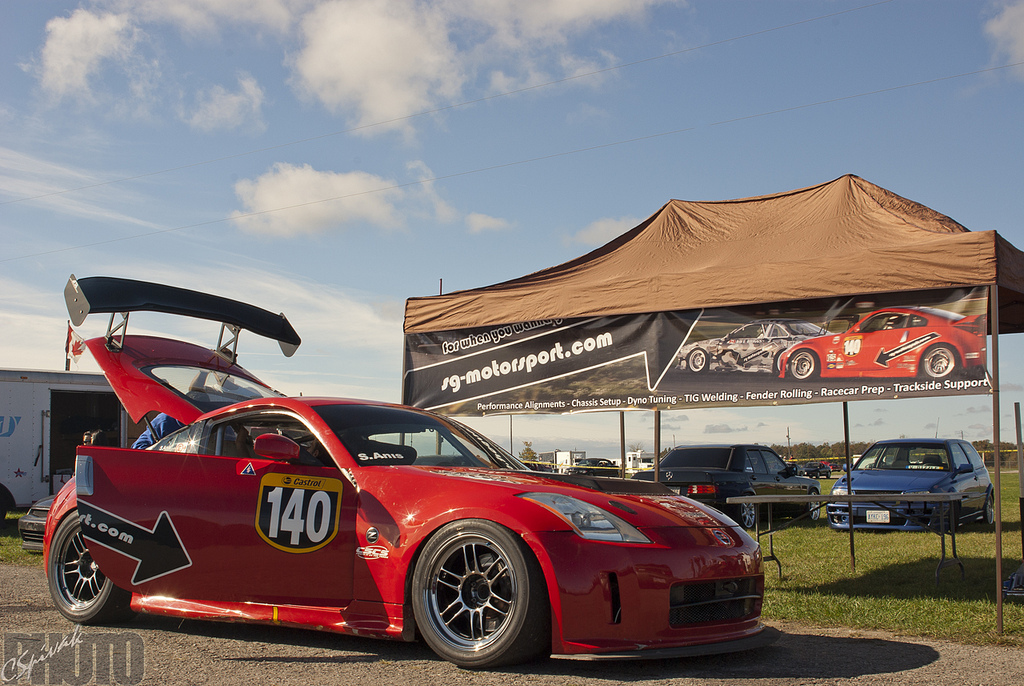 Well it’s been a week or so since the last round of CSCS for the season. While the CSCS stuff is amature, specifically the time attack and drifting, it brings out more fans than many pro events, and it certainly is fun to watch the up and coming talent from across Ontario. I like going to these events with the Z because of course it helps promote SG, and because it brings me back to my roots. There are always a few old familiar faces I haven’t seen in a while, and watching the drifting and being around so many people passionate about racing and motorsports just makes my heart happy. On some level, grassroots racing is more fun and more “real” than some higher echelon racing, which often becomes more of a politics game than a game of speed.

In time attack, there’s nothing to be gained by sandbagging or pretending. You give it your all, both in building the car and in running it. That’s what I love. Everyone built their own cars, for the most part anyways, and drives their own cars. It wouldn’t feel right to rent a ride for a CSCS time attack, or to bring out a pro team that built a car for you. But since I still do the wrenching on my Z, at least most of it, I don’t feel so wrong by coming out and running. Even if it is a “pro” racecar. Besides, maybe it inspires some guys out there who want to learn the difference between a modified street car and a real racecar.

Anyways, this is how the day went down. I got up super early, which in itself pisses me off, and then went to the shop, got the trailer and headed to TMP. Luckily we beat the rush into the entrance and got a good spot to put up the tent and SG  banner. Gotta promote! Unloaded the car and did a quick checkover on it and relaxed for a little. All I was really planning on were a few laps to set the car up, feel the new Dunlop tires, and then park it until the Time Attack. I helped Marco with setup and driving with his S14, Elijah had his MR2 out and was enjoying that as well, so there was lots to do.

There were a few neat cars at the track, but nothing came that looked too frightening. Jim’s FD was out, an open wheel kit car of sorts, Will and John of ENMO racing with their twin-charged civic that we tuned a few months ago – although it was running on street tires so it wouldn’t be a contender, and a few sweet BMWs. I figured we had this one in the bag – which also meant a feature in Performance Auto & Sound magazine for the lap record holder 2010. Cool.

First session out and the car felt amazingly terrible. Absolutely zero grip, maybe less than zero, and the dampers were just way too stiff. Shuddering and bucking over every little bump (and there are a LOT of little bumps at TMP. And big bumps. Lots of bumps.), sliding around everywhere, refusing to build grip and honestly – being a little bit scary!

Now, this is normal any time I’ve just been at Mosport. The mind gets accustomed to 1.6 G’s and average corner speeds approaching 200km/h, you just feel like you’re crawling going any slower. And the result is overdriving the car. The aero isn’t working (much) at these speeds, and in the low gears you have an abundance of power to spin the tires without any real effort. Add the bumps into the equation and you find it very hard to feel like any setup is “good.” The bright side is however, it always gets better, and by the end of the day the car always seems to have found itself. Of course it’s likely more myself doing the finding – with my driving.

With more laps the tires start to come in, I start to slow it down a bit, the tire pressures get corrected, along with the high and low speed dampers (for you nerds: too much low speed everything, not enough high speed bump. Car was crashing over upsets everywhere, but skittering and refusing to bite), and some brake balance tuning. Car started to come together. With all the traffic out there it’s hard to get an idea of the car’s speed, but it didn’t seem like I was going to do a 1:15. I’d be lucky to match my old time. The traction control though. It was to die for. Knowing that it would limit slip just let me be sooo much more aggressive. I could stay in it, just check countersteer at it until the car stopped sliding, and basically stay exactly on line, never having to lift, but being slightly (and ever so) sideways the whole time. And it sounds so badass. It’s like a burbling popping crackle interrupting the smooth screaming high pitched exhaust that reminds me far too much of an F1 car. And I know that’s a big comparison to make. But it really did sound the part. Just half the pitch or so.

So the Time Attack comes around. I do some stupid little shit. Nerdy shit mostly. Add 3 Litres of fuel. Just incase. Tape off the bumper. Wait that’s too much. A little less. Ok. That should be alright. Tape the gaps to the headlights and fenders, give the car a wipe down, you know, clean the wheels. There are so many cracks in the front rotors it’s starting to get scary.

And then it’s time to go out with Marco. I know he can go faster, he just needs to be yelled at. He hasn’t got the lines down here 100%, but on the warm up lap I quickly show him where he wants to put the car in some of the techncial bits. The first lap I give him firm and loud instruction, but I’m not too intrusive. On the second and third lap though, I start screaming at him to floor it, to brake, to turn in, basically any movement short of breathing. And it works, we go a second faster than he’s ever gone there, and there were still a few spots we could have easily hashed out had we had more time. He’s happy, and for only having 240whp, he did really well.

My turn. I warm the engine up, then let it sit to get as much heat out of the oil and rad as possible. The bumper is pretty taped up. Nascar style taped up. I knew the engine would overheat, I just didn’t know exactly when. I figured the colder the rad and the oil the safer I’d be.

The key to this time attack was to get the heat into the tires as fast as possible. I only have 3 hot laps, and with each lap lasting little over a minute,  with all relatively slow speed corners, it wouldn’t happen on the warm up lap alone. The goal was to have them fully up to temp by the finish of the 1st lap, so I had 2 hot laps to make it count. And that’s more or less how it went down. The warm up lap was spent upsetting the car and making it spend as much time sliding as possible. Either spinning rear tires, or understeering, throwing the car around, and of course heating the brakes. Brake heat is important to make sure the brake balance and feel remains consistent – and at a track like TMP, with 3 difficult and hard brake zones, there is a LOT of time to be made up by consistent sharp braking.

The first lap was pretty much a write off. I bombed the first corner way wide, I guess I braked too late, but either way I lost a few tenths there, and the tires were still far from totally in. Still amazing how long slicks take. It was still a good time though, matching my best effort from the last time attack. Anyways, second lap was a flyer. I just messed up the second corner, clipped the apex too much and dropped into the dirt and upon landing heard a big BANG. I figured I broke something. It startled me. Everything else was more or less on point, and I put down a 1:16.1. See, that’s the piss off. Being so close to the next lower integer but not quite being there. I knew that I could do a 1:15 if I didn’t fuck up. But knowing that would certainly make me fuck up. The pressure was on. And I did. I did fuck up, on the 3rd last corner I came in a little too hot, braked a little too late and was wide by about 4 feet from the apex. Because it was a hairpin rather than a kink it didn’t matter so much, but I still figured I had thrown it away right there. I kept it clean for the rest of the lap and to my amazement, a 1:15.95 lit up on the dash! So good. Maybe the tires were still getting better, or maybe I was just that little bit more aggressive everywhere else without realizing it. Either way, I was ecstatic.

Then, to make things more awesome, as I started slowing for the first corner just after passing the start finish, my warning light came on. OIL HOT. How hot? 152 degrees C, or 305 degrees F. That’s frigging hot. Water was about to boil over too. Cool. Perfect Nascar timing. So I cruised around and cooled her down and parked the old girl. Fun. Watch the video below, words just don’t do it justice!

There is certainly something to be said about time attack. I mean, I’ve already said about 1600 words about it, but the fact that it all comes down to one lap. It’s so much more intense than a race, where a few mistakes won’t kill you. In time attack (just like in qualifying) you really push for every last bit of time, hiding in so many fun and interesting places. But it’s a doubled edged sword. You have to know when to stop. Or you’ll make one mistake that throws away all of your small gains. So it’s as much mental as long distance racing, because you need to meter your aggression very carefully. It’s also fun because you can setup the car so aggressive. You only need to deal with it for a few laps, so the brain can handle it. If I were to race my car the way it was for this time attack, there’s no way I would be able to keep a low 1:16 pace. It’s just too knife edged. But I’ve always loved qualifying. I’ve always loved going as fast as I possibly can, even if it’s just for one lap.