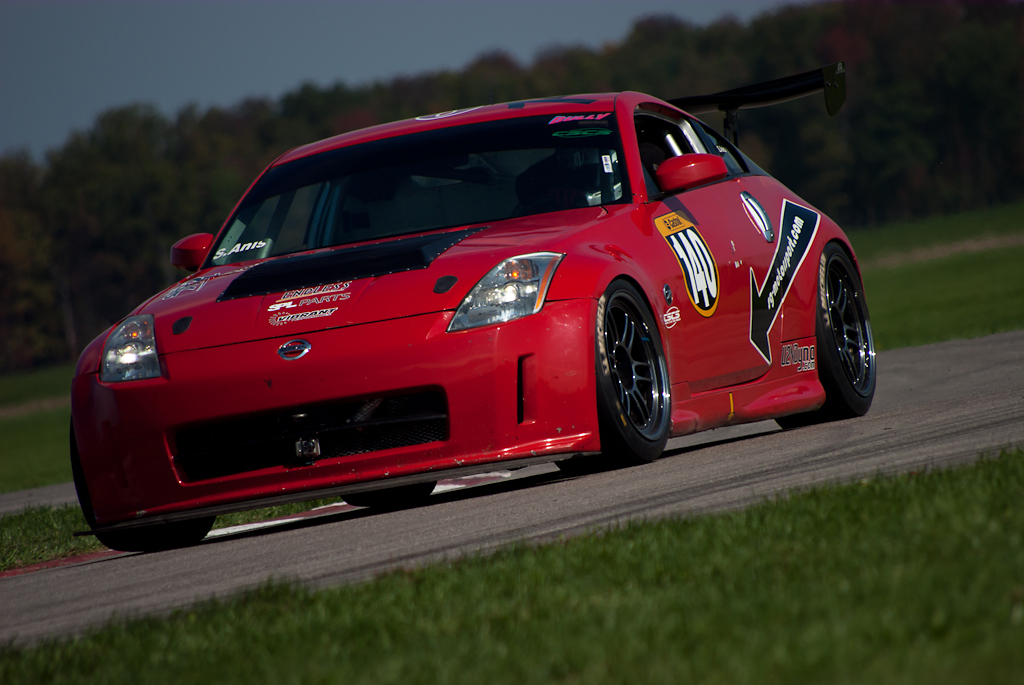 I don’t think I’ve been as excited all season as I was at CSCS. The race wins at ICAR and Mosport were awesome there’s no doubt, but there’s just something about the crowd at CSCS and the intensity of time attack that gets my adrenaline pumping.

If you’ve been keeping track of the progress throughout the last few weeks, you’ll know that we’ve made some small improvements to the car, and were aiming to improve on last year’s time at CSCS (was a 1:15.9xx), hoping to beat APH’s EVO which was damn quick with a 1:15.4xx). Although we had done a lot of work, most of the work we did wouldn’t make the car much faster. The larger cams and intake manifold we installed gained some top end power, but at the expense of acceleration below 5500rpm. The weight reduction was great, but I was nervous the amount of rear weight we removed would unbalance the car and make it hard to drive off of corners. Not to mention the car hadn’t been out since last year, who knew how things would go!

We got to the track early, and to my disappointment I wasn’t shivering as I normally am in late September with just a t-shirt on. Infact it was rather warm, and humid. Felt nice for us, but Kels likes dry crisp air to go fast. We hooked up the 4 GoPro’s around the car, including for the first time a pedal-cam to show off some left foot braking action, did a quick check over, threw on the new-to-me Michelin tires, strapped in as the first session was ending and was able to do one shakedown lap.

The car didn’t feel too bad, despite not giving the tires much time to heat up, but the ass of the car was bouncing all over the place. Looking at the data after the session and sure enough, there wasn’t nearly enough high speed control in the damper. Unfortunately the rebound is already maxed out – so I added some high-speed bump in hopes to slow the bucking bronco down a little. Time to re-valve these shocks I think! They worked incredible with the softer springs, but going from 800lbs to 1300+ is quite the jump 🙂

Andrew had his RX-8 out, and bob was ripping my #14 Genesis, so there was some good SG presence at the event. I got a few more laps in with the Z and things started really coming together. More RPM, faster shifts, later braking, more sliding and best of all – perfectly tuned traction control. It’s quite satisfying when you can be full throttle when you know you shouldn’t be – feel the car sliding the smallest amount and then hearing the Motec selectively kill cylinders as required to limit the power. The sound is almost better than the feeling. Almost. I got a few semi-clean laps in, each lap passing two or so cars, but they weren’t holding me up too badly. The best lap was a 1:17.0xx, which was a pretty good sign that there was more in the car.

After reviewing the data I figured the car should be able to do at LEAST a 1:15 flat. I was pretty excited for the time attack, I really wanted that lap record! I went out with Andrew in his RX-8 and we worked on his smoothness, ripping at the limit but being careful not to step past it (we almost got t-boned when he spun getting too excited into corner 1 haha). He was ripping hard though so I was excited to see how well he would do!

And then it was time. We lined up, no changes made to my car, and I started the warm up lap. The ever painful warm up lap on slicks, where the tires just hopeless. The first lap was a let down, the first half of it just obviously without grip – these tires really seemed to need some time to get into their happy place. Towards the last half of the lap the car started to feel hooked up and I got a good shot out of the last corner for my second lap. Lap one, despite feeling like total shit, was a 1:15.7!! 2 tenths on my previous best, and I KNEW the tires were going to give me more. I just had to be careful not to make any mistakes.

Really late braking into 1, dive the car in on the apex and at the earliest moment possible I picked up the throttle. Feeling the car neutrally slide out, on the verge of huge oversteer right up to the outside curb is such a fun feeling. Bouncing over it and listening to the engine wind out to 8400rpm gets my adrenaline pumping like no racecar ever has. I dare myself to see how late I can brake for corner 2, knowing that if I brake too late it’s straight off the track for me. Up over the curb and a bit more throttle for good measure, quick down into 2nd brings us into the esses section. One of the most fun, most difficult sections of the track. I pushed a little too hard into the second “ess” and got a little squirly coming onto the short straight before a tight left hander. Not too bad though. Hard on the brakes and down to second for one of the slowest corners on the track, not enough throttle on the blip and the rear tires lock up! A little correction on turn in, get the car settled and relaxed and then full throttle! Some glorious traction control noises, pump 3rd gear and dare myself once again to see how late I can brake. This time through the chicane, brake, turn in early, little too fast! Smash curb, pick up throttle, get the car back over to the left, BRAKE! Time seems to stand still going through the hairpin, waiting for what seems like an eternity for the car to turn around, add as much throttle as possible and again smash 3rd, keep as much speed as possible through the kink and get back on the throttle right up until the point where I’m 100% confident if I don’t brake RIGHT NOW I will kill 20 spectators. Wait a moment. BRAKE! 2nd! Get the car rotated and settled, pick up the throttle and slide out to the wall, enjoy the exhaust resonating off the wall all the way up 1000rpm higher than I’ve ever heard it before, smash 3rd. Smash 4th.

Wow. Over a second faster than my previous lap. It doesn’t even make any sense. Although its almost an identical situation to what happened last year. Second lap was leaps and bounds faster than the first. The tires heat up and maybe the driver does too! Third lap I figured, I’ve already got this thing beat by over a second, let’s drive like a total asshole and see what we can make of it. I was sure I was going off the track at just about every corner. I was almost full lock counter steer entering the tight left hander after the esses, got it settled by the apex and somehow, had a really good exit. Flew through the chicane, locked up inside front tires everywhere, got through the hairpin reasonably well despite my heart rate of 6000, and crossed the start finish line with….

Watch this video, the camera angles really make you feel like you’re in the car with me. The helmet cam gets each bump, shows where I’m looking, captures the sound incredibly well, and you even get to see my shift lights. The pedal cam shows a few tricks I’ve picked up along the way, like left foot braking, tapping up to eliminate dreaded knockback, and some classic heal-toe downshifts until the day I get a sequential gearbox, when it’ll be all left foot braking! The splitter camera gives you a great sense of speed, being so close to the ground, and the side camera shows the tire distortion and movement of the chassis which is fun to watch.

I fucking love that car. We had so much fun. The crowd was excited, and I did my job to get them more excited. Some sliding, some burnouts and some revving for good measure.

Next week we must now to go Mosport. And attempt a 1:24. Although I will be very pleased if it’s just a 1:25, that’ll still be over a second faster than I’ve ever been there.