Almost Walled It Hard With The Z… 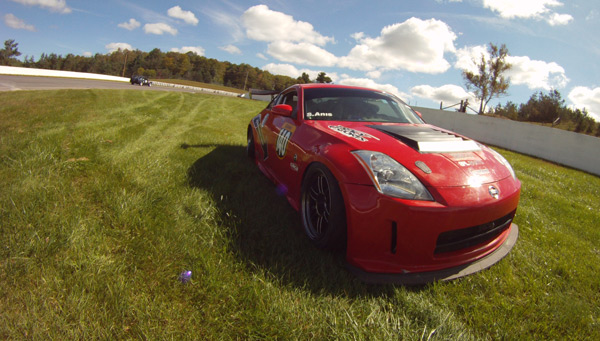 Today was going smoothly, just tuning on Kels and trying to get some jamming times out of her, when shit hit the fan. I had a feeling today was going to get a bit wild because I was driving like an animal and getting a little too excited, sliding around everywhere using all off the Motec’s beautiful traction control (which sounds fucking BAD ASS by the way) but that usually happens when I’m going for a record lap time. I did a 1:27.09 and flailed my arms in the air in disgust. Still no 26s. Car felt loose though, and had way too much rear brake bias. After some more tuning I was back out for more when trouble knocked on my door.

Thankfully however, it knocked at just about the best possible time. If you know anything about Mosport, you know that there aren’t many places you can go off without pretty much destroying half of the car.

Well, we are prototyping some mid-link arms for SPL and the one broke at the adjuster. For those of you unfamillier with Z’s, the mid-link is the arm that controls the toe of the tire, and the spring acts on this arm. So when the arm broke, the chassis “fell” down onto the rear corner, and the tire toe’d out 30 degrees. Insta spin. At 180km/h (that is the EXACT speed, no exageration) you have to be fast to react to ensure you don’t make matters worse by throwing yourself at one of many concrete walls surrounding the track.

Luck was on my side. Thankfully the arm broke at the bottom of the hill, and I had more or less a straight shot to try to stop. Spinning yes, but at least my momentum was in a direction without walls.

I’ll get a  video up tomorrow so you can see exactly what happened, but these will have to do for now. In the picture above I’m just letting it wind up, needs more angle!!

The best part of this entire incident, aside from the incredible rush it gave me, was searching for the spring, tender spring, and two spacers that launched out of the arm when it failed. 30 minutes of digging and we found every last piece! Haha, sooo good. But more about the rush. It must be the time and energy I’ve put into this car, but the thought of pumping it into the wall is an absolute impossible thought that just must not happen. Hearing the BANG and feeling the car start to spin instantly and fighting the thing to keep it on the track gets your adreneline pumping like very little else. I almost want to do it again!!! Looking back, knowing the arm could have broken anywhere, even at the top of two is the scariest part. When you haven’t even started through the corner and without the grip to turn you’re simply an uncontrollable projectile headed for a very, very solid wall.

So that’s all I’ve really got to say about that.  The #87 Genesis ran great today, and should be ready for the endurance race tomorrow, which will be a fun time! And in other news, the Titan tows awesome. Love that truck.