Hey there kids! Well we sure had a busy and exciting summer. In fact, 2015 was the busiest and most exciting year for OnPoint yet. We tuned new types of cars, raced new cars with new people, and even developed our first product. OnPoint has hired its first full time employee, and we also blew up a $10,000 gearbox! Let’s get into the details with some pictures.

In the dyno corner the Subaru’s were certainly the car of the year this year, narrowly beating out Nissan’s as our most popular car, thanks in no small part to the guys at Touge Tuning for putting their faith in our keyboard jabbing skills. Some of the highlights include Jack’s 2015 STi which is the ultimate street car, and Touge Tuning’s own 2015 WRX which Chris has done a great job with as both a true daily driver and CSCS Street Class contender. 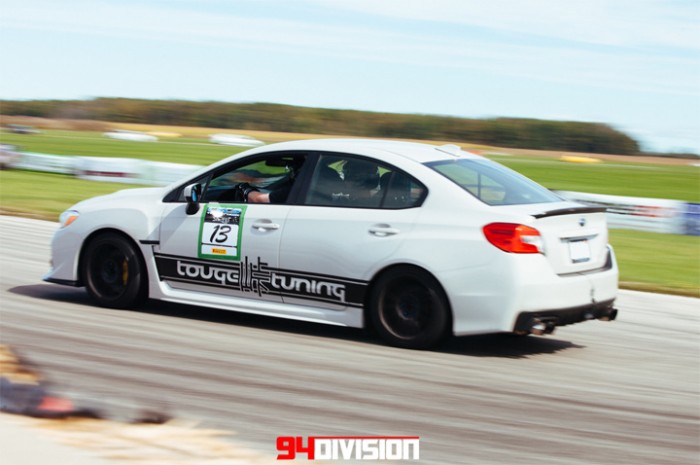 Chris working for a podium at CSCS, Photo Credit: 94 Division

Here’s a dyno plot of Jack’s car with header. Just the right amount of power for a street car, balanced with the comfort and luxuries Subaru did such a great job on with the 15 STi. 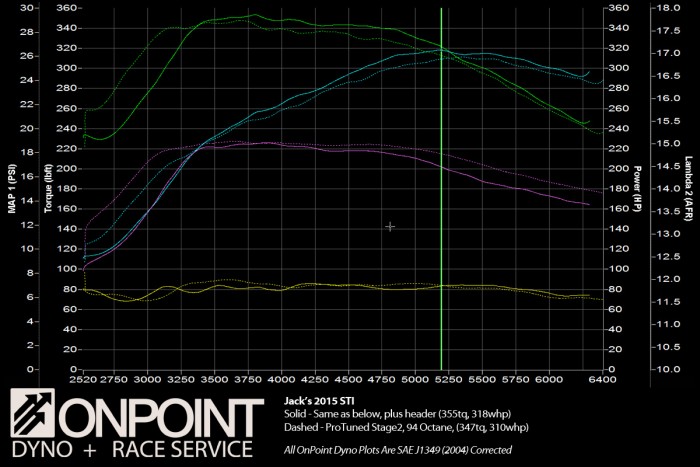 Jack’s 2015 STi may be the ultimate mildly modified street Subaru.

The vintage Porsche’s seem to keep coming back as well. Most of these cars are equipped with Electromotive engine control, and despite my best efforts to get these guys into something a bit more modern they tend to stick to what they know works (rather than what I know will work better). I am sure that 2016 will be the year to upgrade for a number of these guys, especially for the track-going guys who could take advantage of ECU to Data Logger communication, something we take for granted!

And of course we had some other exciting cars to tune, like Miro’s 820whp LSA powered, nitrous snorting Camaro. This thing looks like a ridiculously good time:

Speaking of Camaro’s, we are also working on a complete electrical system for Anthony Mantella’s 69 Camaro Resto project. The project consists of a Motec PDM30, Racegrade 15 way keypad, Motec C127 dash, Motec LTC, and OEM GM ECU with a GM Performance engine harness that has been integrated into our chassis harness. This car has a lot going on and I am excited to see it all come together. 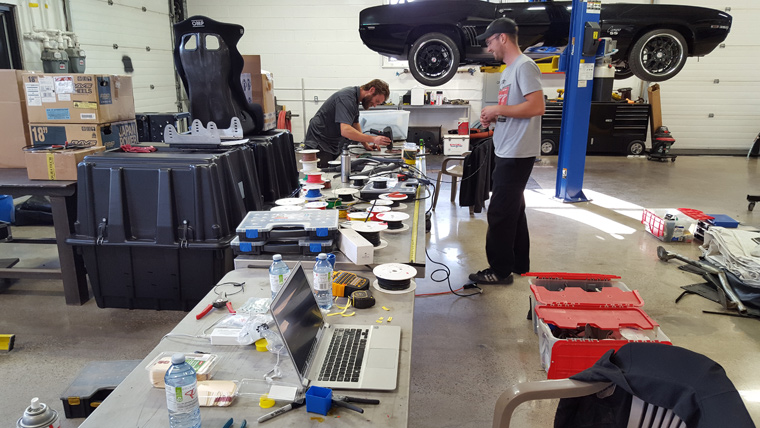 Making a mess during our harnessing party. Joe is laughing as usual. 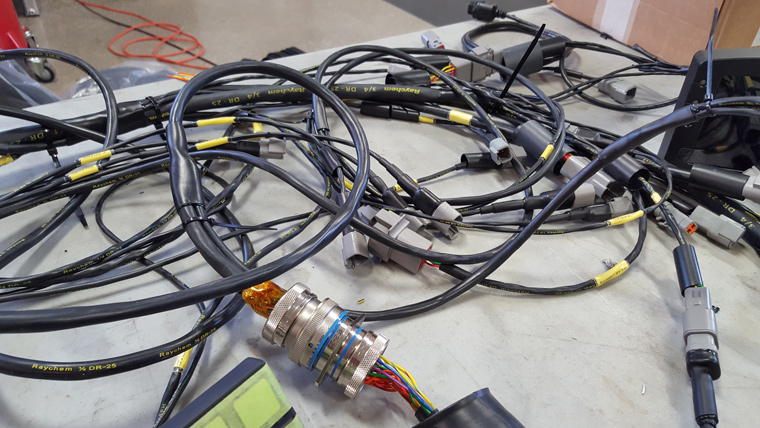 Harness during testing. We program the PDM and test all of the outputs and CAN communications before the harness goes in the car. 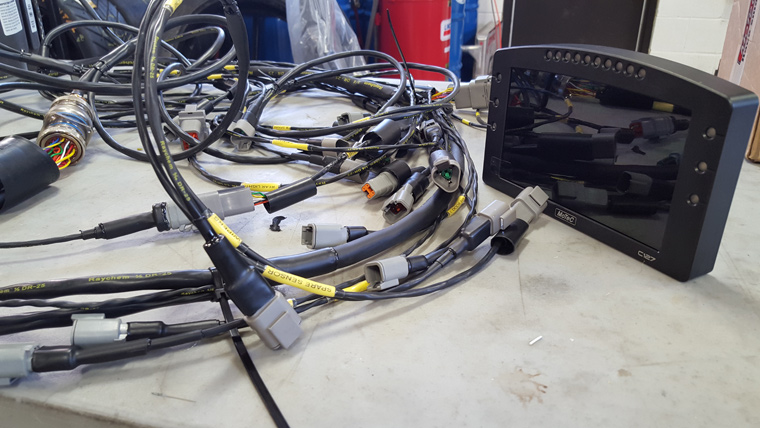 Once everything is confirmed to be working, we will shrink all of the boots down onto the connectors and seal her up.

Sadly, it wasn’t a very good year for Kels. We were able to get the MakTrak transmission to hobble around the track for a couple of laps, and while there was a very bad vibration that could have been resolved with a new input and output shaft, the company just wasn’t able to deliver. Tragically the owner of the company passed away, and just after that our gearbox ate itself on the dyno. After looking over the broken bits and pieces we were able to determine that somehow 1st gear was engaged while 5th was still engaged, due to a failure of the shift barrel. It appears excessive fore/aft force was applied to the shift barrel which caused the guides for the 1st-2nd fork to break – letting the fork engage 1st. Literally everything exploded. The main case cracked due to the extreme force of the two shafts fighting each other wanting to turn at different speeds. As that happened both 1st and 5th gears broke teeth of, the 1st gear dogs broke, and the fork was damaged. Not to mention the shift barrel guides that were broken off.

KABLAMO! MakTrak just popped 6th gear. So sad. Back to the drawing board. #sequential #neverworkedsincedayone UPDATE: We dissected the box and it appears as though 1st gear engaged while still in 5th, causing total destruction. The cause is unknown but the barrel drum guides were broken for first gear indicating that it was allowed or forced into 1st! A video posted by Sasha Anis (@onpointdyno) on Sep 11, 2015 at 6:16am PDT 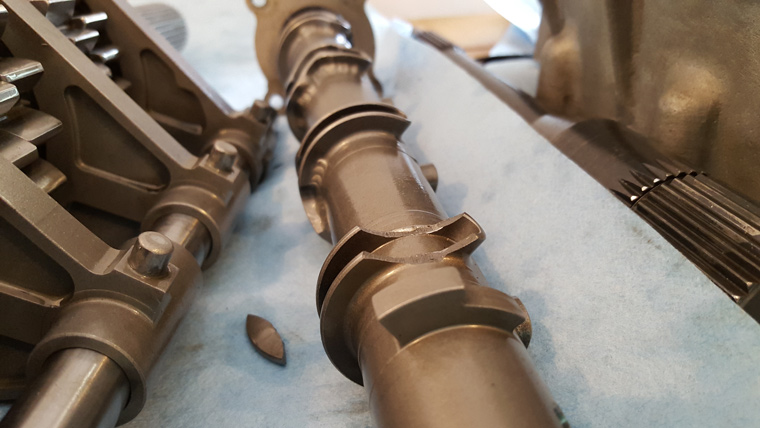 Here is the culprit – the guides for the 1st-2nd fork broke off allowing the fork to engage 1st. Likely due to excessive fore-aft force on the barrel. 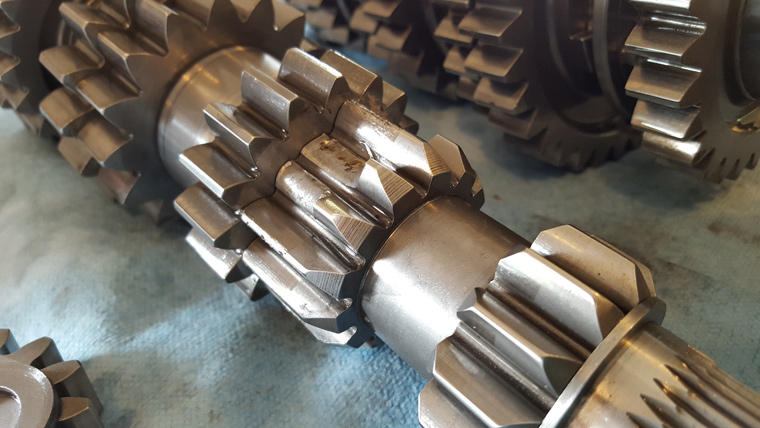 1st gear is machined into the lay-shaft, so replacing a single gear would not even be possible. 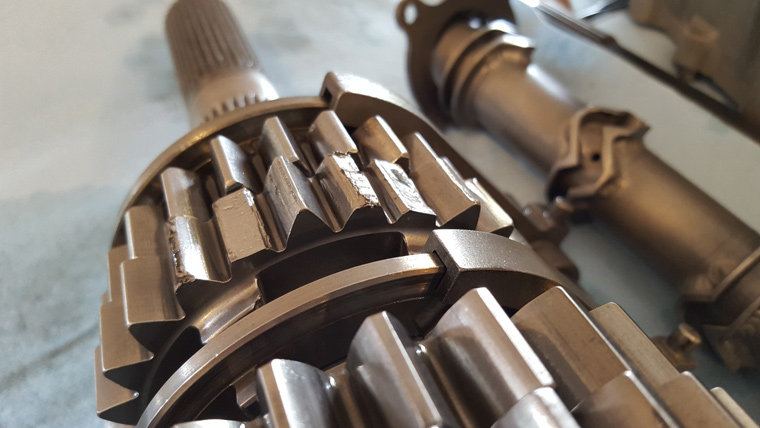 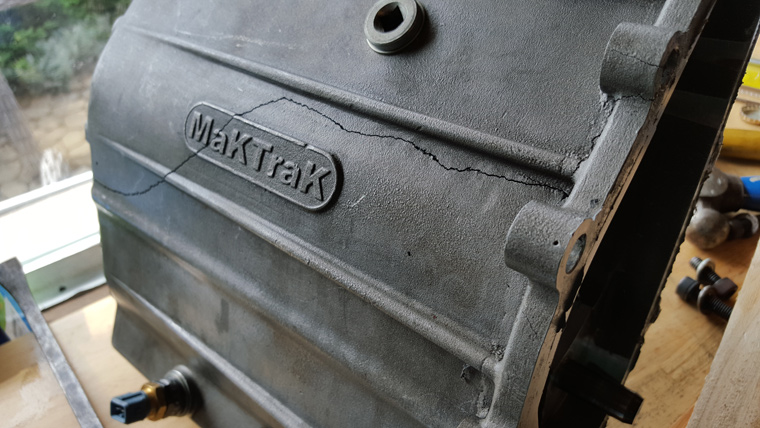 You can see the case split from the rear bearing carrier right through to the front of the housing.

Thankfully, Quaife has expressed interest in promoting their fairly new 69G gearbox. Quaife actually has a direct bolt-in solution for the HR 350z, including bell-housing and all. All that will be required on our end will be a bit of customizing of the transmission support and a custom driveshaft. Why didn’t we go with a Quaife the first time around you ask? I’m not sure. Our plans are to do a complete “at the track back-to-back” test of the Quaife vs. the OEM Gearbox. We know from the MakTrak that the differences in lap times will be close to 8/10ths of a second if not more at Cayuga. 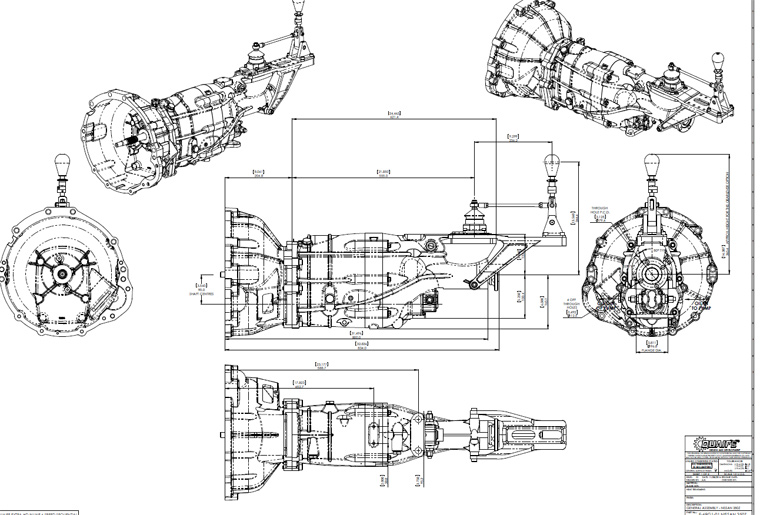 So as a result of having Kels out of commission all year, my good friend Andrew Stittle (mechanic and truck driver for Mantella Autosport) and I purchased an S14 drift car that one of my customers was selling (http://www.onpointdyno.com/?p=1939)

It was an incredible deal (in fact I told Paul he shouldn’t sell the car when we went to buy it, the price was way too good), and so we jumped on it. Stittle worked hard finishing up the bash bar front end and bumper/fender mounts on the car, as well as doing a full mechanical check-over and changing a few things. We then built a brand new chassis harness and switch panel and purchased a new engine harness from Wiring Specialities as we were too lazy and busy to build a proper engine harness. Motec supplied an M130 ECU with the GPA package, and we took a few spare parts to finish out the first version of the build, including Kels’ old Motec ADL dash and shift knob, Sandra’s old Bride ZETA III seat and Willans’ harnesses. Talk about nostalgia.

The interior of our drift car is a little ratty but it has all kinds of nostalgia. Kels’ old dash and shift knob, and Sandra’s old Bride seat and Willans harness! The switch panel is also just like the ones we did for the S14 builds we did in the SG Motorsport days. #s14 #nissan #motec #driftcar #party

The car ran flawlessly on the dyno, on the racetrack, and starting up when it was below zero outside. We rented Shannnville’s skidpad and had a great time burning out Paul’s left over tires. This car is a ton of fun and we are planning on throwing some nitrous at it next year to help spool up the very large turbo. We also need a bit more RPM out of the motor, but don’t want to get too greedy as we all know how much SR20’s like to throw rockers. If you have a moment watch this video of Sandra 2.0 in action. The driving is a bit sloppy but with some more seat time I think we’re going to have a ton of fun with this car:

Another car that came a long way was Kevin Stittle’s swift. This car has been the death of me for the last year or so and we finally came to some understanding. No car has ever made me feel like such a terrible driver as this swift. It is small, tiny, and unassuming but let me tell you it is the devil. The short wheelbase combined with manual steering mean the thing will yaw up instantly and I just simply cannot get the wheels pointed where I need them to go fast enough. That and for some ridiculous reason I have a ton of trouble with the gearbox and regularly grab the entirely wrong gear. So when we put down a 1:18.3 at Cayuga at CSCS and just missed the Unlimited FWD podium by a tenth of a second or so – I was content. A 1:18 used to be the absolute Time Attack track record for CSCS – I know because I set it with Kels… many many years ago! It’s a pretty respectable time for a car with 120whp.

Time for me to have some redemption with this little guy. #cscs #swift #kelsisdead

Kevin has now level’d up and is putting a K20 in the car, with custom fabrication by Chris @ CARFAB. The engine should sort out a few major issues the car had, including excessive inside tire spin due to a weak differential, low power, and poor shifter feel and placement. With the addition of in-column electric power steering the car will be a downright weapon, and I estimate it will do a 1:15, dare I say 1:14 next year with relative ease if Kev gets it reliable and sorted.

Finally, I had the pleasure of working with Orey and the guys at Pfaff Motorsports for a couple of races this year, and look forward to working with them for 2016. Orey has only been racing for a couple of years but has already come leaps and bounds – showing consistency and speed that was enough to win the GT3 Gold Championship! In true OnPoint style here he is crossing the finish line on limiter. The Bosch ECU has once badass sounding limiter I must say. Congrats to those guys on taking a double championship this year in GT3 Canada!

Victory donuts are frowned upon apparently, so @ofidanigt3 decided to make some noise instead when he crossed the line….don’t worry, we did donuts too #videocomingsoon

Well this post is getting rather long winded.. So I will start to cut it short, but I want to share a link to our new VQ35HR ITB kit that we have developed alongside Jenvey. We have already produced and sold a couple of sets with almost zero marketing, so as we push these over the winter I am excited to see how many sets we can get into the community’s hands. Obviously ITBs are a difficult upgrade for most, requiring a standalone ECU among many other things, but the reward is worth it, especially for those with a racing car. The throttle response is awesome!

Here’s a photo of our kit mocked up on a customer’s VQ35DE with HR heads in Australia, with CNC’d Air Horns we drew for him that he had machined in Aus. Well done mate! 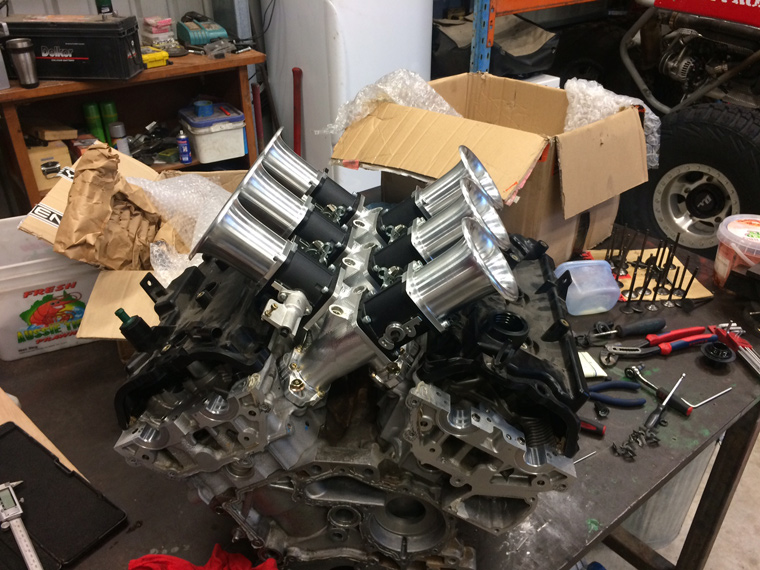 Shawn’s ITBs mocked up on his spare engine. Looks like a party to me.

I would like to add to this post to congratulate and recognize all of our great customers that have had success with their cars and racing programs this year – but we are already at 2000 words here. So thank you to everyone that has helped make OnPoint a success these last few years and I look forward to serving you all with well tuned engines and motorsport electronics in 2016! We have a lot of very exciting things going on behind the scenes and I am sure 2016 will be an even bigger and more successful year than any before it. Stay tuned!

Now, before I end this post I want to mention that this summer in the middle of OnPoint madness I married the love of my life and my best friend. We had an incredible wedding, surrounded by amazing people on our home yard. Nicole did an incredible job planning and organizing everything, which is a ton of work when your wedding isn’t at a normal venue. Every detail was perfect, like a finely tuned Motec with all of the enables. It was awesome and I am very lucky to have her. Have a great Christmas everyone! 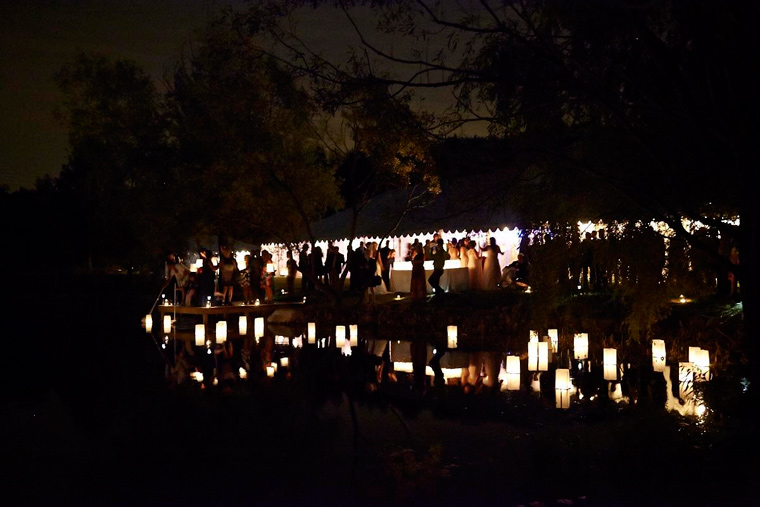