I guess you could say it’s been a busy summer. It has also been a busy spring. The website has gone a long time without any blog post updates, something I am most certainly not proud of! But if you’ve been following along on Instagram (@OnPointDyno) you already know about our 2015 adventures . If you don’t have Instagram you should get it just to see all of the fun and exciting cars we’ve been tuning and projects we have been working on.

We have been tuning a lot of cars and 2015 has by far been the busiest season yet with the dyno. Some of the highlights of the season include a supercharged C7 Corvette belonging to Martin Barkey from MBRP, Pat Cyr’s new 2JZ engine setup in his Formula D Canada FR-S, complete with OnPoint designed and build harness (with VVT-i using a Motec M150 for control), Corwyn’s 530whp Subaru WRX build by Touge Tuning, and Philippe’s Hyundai Genesis CTCC racecar that is an improved version of the Gen Coupes we campaigned from 2010-2012.

Installing the harness we built for @patcyr86 ‘s #2JZ FRS. He’s bugging me to fire it up but we need to test the outputs on this #Motec #M150 first! #m1army @motecusa

Had the pleasure of tuning a #C7 #procharged Vette for @martinbarkey. Thing makes big jam! Now it’s time to tune a #motec #m150 for @patcyr86. Let’s make this a 1300whp day! #neverstoptuning #HPTuners #lsx #corvette #gm #teamchevy #winterdrivenvettes   A photo posted by Sasha Anis (@onpointdyno) on Apr 23, 2015 at 10:30am PDT

Pats car ran awesome on the dyno. M150 ran this #vvti #2JZ like a boss. Stopped at 630whp because oem diff. While that sounds like great power, we had a 4 cylinder make more yesterday! More on that later. #powerparty #neverstoptuning #gtx #efr #motec #motorsportelectronics #dynapack   A photo posted by Sasha Anis (@onpointdyno) on Apr 25, 2015 at 3:18pm PDT

Had a great time helping good people prep for their first #CTCC race. We spent a day on the dyno and a day at Riverside speedway developing the car. BL, Apex and I even explored Quebec City! #neverstoptuning #OnPointDyno #haltech #roadracing #smashcurbspackgears   A photo posted by Sasha Anis (@onpointdyno) on Jul 23, 2015 at 1:22pm PDT

We have also been seeing a ton of supercharged Scion FR-S/Subaru BRZ’s come through the door – such a great chassis really deserves more power and the Kraftwerks, HKS and more recently Jackson Racing superchargers really give the car the extra kick that it needs without losing the responsiveness or fun to drive characteristics that make the FR-S such a great little car.

This #HKS supercharged #EcuTek controlled #BRZ made potent power, but it won’t have nearly enough to spin these 295 R888s! #neverstoptuning #springishere #onpointdyno

I am also happy to report that our brand new 2000 front pods have finally arrived. We had purchased some used 2000 pods two years ago when OnPoint first started doing AWD cars, and the pods have never been quite right since we got them. So the decision was made to pony up and buy a brand new set of pods and the decision was well worth it. The front pods now work as well as the rears and I am excited to start doing more cars that I was nervous to do with the old pods, like R35 GT-R’s in particular!

Nothing like a new set of dyno pods to start your day! #dynapack #neverstoptuning #finally #6wd #party

And then there was Kels. She has been frustrating me lately – and it has really not been her fault. The sequential gearbox supplier has been unable to machine us an input and output shaft with an acceptable amount of runout (i.e. none), so while the sequential gearbox works it is causing violent vibrations and I am afraid to drive the car much faster than 200km/h for fear of a mechanical failure. The car is in limbo right now as we are so busy working on other projects and I don’t have a contact for the right guy to machine me up new shafts, or to possibly bend the shafts back into spec. That being said, all of the sequential gearbox parts that were machined came out absolutely beautifully, the parts we designed were: Shifter Shifter plate with roller bearings Shift knob (3d printed) Slave cylinder adapter and spacer to adapt from an AP slave to the Tilton, Carbon tube ends for the shifter linkage and a rear output shaft bearing carrier – this part is designed to support the drive-shaft with a bearing as the output shaft has only one bearing holding it.

I’ve been away for the last 2 weeks racing but I’ve had some great help getting the sequential gearbox parts ready. You can see the shifter plate, Slave cylinder adapter for the #tilton slave and some bushings and spacers to fine tune the clutch slave height. Thanks so much to Phillipe for all the great CNC work. Also have to say thanks to #MakTrak for shipping out the input shaft on time and Usic and Heinz for machining the bellhousing for me while I was away. It’s gearbox tuning time! #racecarthings #neverstoptuning #onpointdyno

Here it is. All complete. Together. United. Shifter and gearbox. At last. With a carbon tube holding them together. A very special bond. #Maktrak #Motec #texense #proracecarstuff #neverstoptuning #reallifevideogame

All in all everything is working great, and we were able to do a few laps around TMP with the car. The Motec M800 controls the ignition cut better than I could have imagined. It also only took about 15 minutes to setup and tune the cut and the shifts are lightning fast. Using a Texense strain gauge to initiate the cut when the chosen shift lever force is exceeded, followed by a the gear position sensor on the box to tell the ECU once the next gear has been engaged. Once that happens, the Motec ramps ignition back in smoothly over a minuscule period of time. On oldish tires the car went 0.5 seconds faster than it has gone before, so the gearbox appears to be worth some time. Here’s a quick video of the lap, I highly suggest taking the time to watch it with the volume as loud as possible. If you listen carefully you can hear the GoPro picking up the vibration from the bent output shaft: More recently we have been working on a VQ35HR specific set of ITBs that will use Jenvey’s larger SFD throttles – these bad boys can go up and above 60mm bore, a fair bit more than the 51mm SF’s that are sold with the VQ35DE kit. The HR has much larger ports and the adapted VQ35DE Jenvey’s that we cut and welded for the HR are crude at best. Now that Kels has a sequential gearbox I am more than willing to part with some mid-range torque in hopes of gaining significant top end power.

Thanks to the guys at Jim Wolf for supplying some dimensions we now have the kit 3d printed and lining up pretty well. The runners are a tight fit being so large, requiring a shape that goes from a horizontal ellipse to a vertical ellipse and then to a circle – all as smoothly as possible while jogging over to one side! Needless to say it will be a complex part to manufacture. We are planning on selling the kit once complete, hopefully the first prototype runners will arrive in a couple of weeks for testing. Keep your eyes on Instagram for updates.

Larger throttles for Kels? This is not what I should be doing with my spare time. #gtcar #kels #vq35 #vq35hr #jenvey #nerdalert

Kels even landed herself in a wind tunnel. I have been working with the guys at the UOIT ACE facility to spread the word about their state of the art wind tunnel, and we had the opportunity to do some testing with the Z in the tunnel. We tried a number of different tests, including blanking off openings to evaluate drag, trying dive-planes and splitter fences, adjusting ride height and rake, and adjusting rear wing and flap angles. It was incredible to see the car sitting still while 160kmh wind rushed by the car, attempting to rip off body panels in the process. The guys at Speed Academy documented the entire thing, be sure to check it out here: 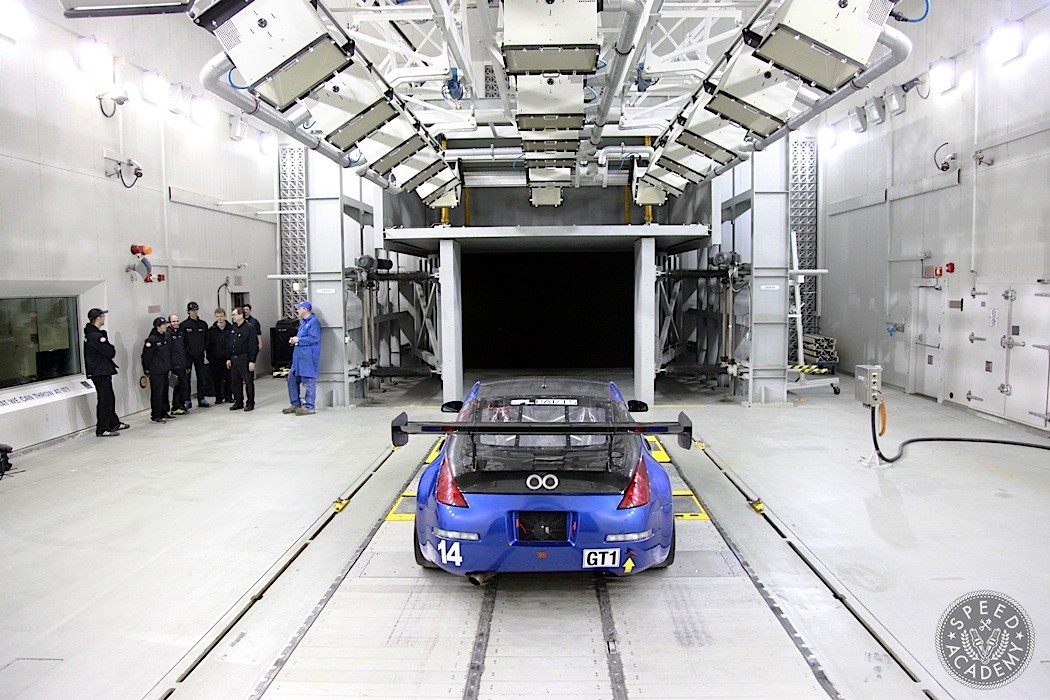 And lastly of course is racing – I have been working with Mantella Autosport for 2015 as the car chief for the #80 MBRP/Mantella Autosport Z28.R Camaro. I actually had an opportunity to drive the #8 car at Watkins Glen when Mark Wilkins had an SCCA World Challenge conflict – similar to at VIR last year. We did fairly well after the series had significantly slowed the car down with numerous restrictor updates throughout the season lowering the engine power, all while increasing weight.

The race ended up being soaking wet and it was a very good exercise in rain driving. The cars have wild ABS systems that allowed me to push the braking zones right to the limit – and the grip with the Conti rain tires are quite impressive! My engineer told me that I was consistently one of the fastest cars on the track throughout my stint which was nice to know – and I believe that had the race not have been red flagged due to excessive rain we would have been able to battle for a few more positions. 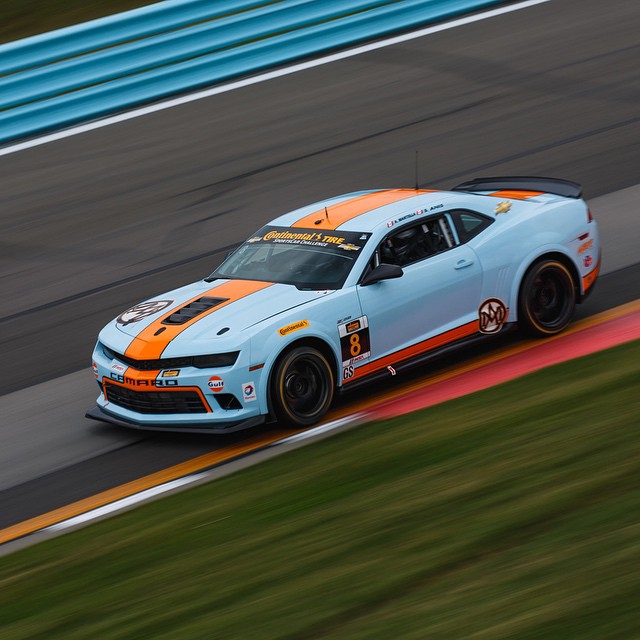 So that’s 2015’s Mid-Summer update. More dyno graphs and technical articles will hopefully come back onto the site soon, and you can always follow us on Instagram and Facebook for weekly updates! With any luck Kels will be ready to go before the season is over and we can hopefully set a new personal best lap at Mosport and TMP.