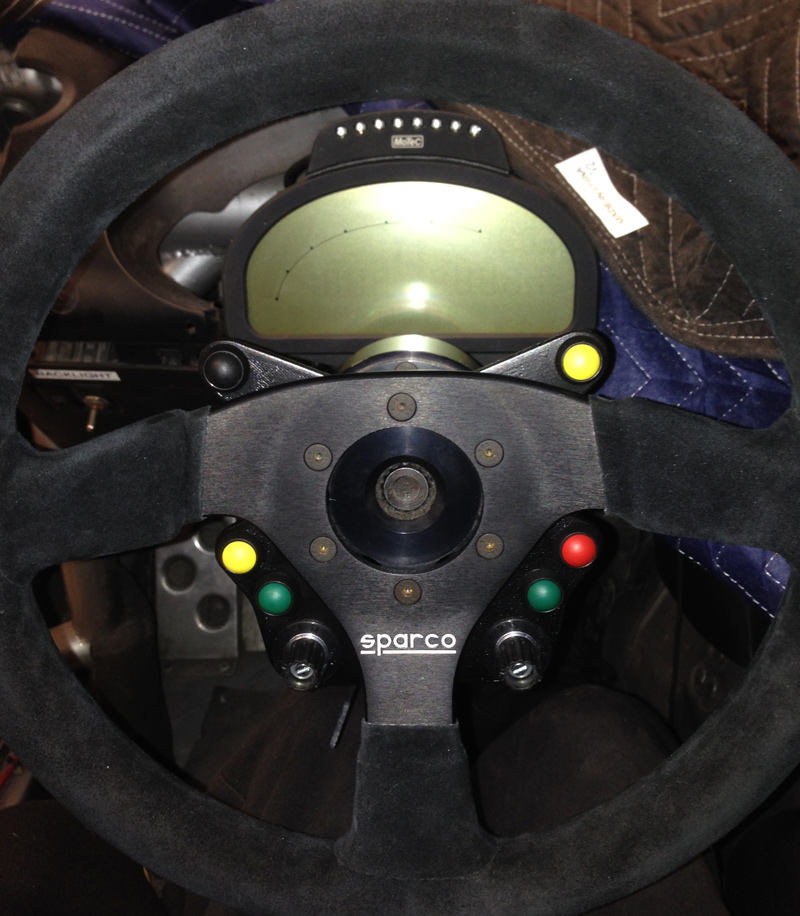 The Motec SLM is quite an extraordinary tool – if you use it as such. The SLM is Motec’s CAN based Shift Light Module. The neat thing about the SLM is that each LED can be configured for brightness, colour and even a flashing pattern. With the power of a Motec ADL or C series dash, we can output a lot of insight to what the car is doing through the SLM. There is the ability to give driver feedback that he can use to be faster or more consistent, in addition to the normal means of alerting the driver in the event of a problem and letting him know when it’s time to shift.

Here are a couple of ideas we’ve implemented into the Z’s SLM through the ADL2:

Shift lights based on MAP position. Normally shift lights can change based on gear, but in our case the engine map position changes the RPM limit drastically and shift lights to match each limiter is more important.

4 distinct shift light patterns, the 4th of which requiring a release for any rental drivers protecting against epileptic seizure.

Pit Limiter Active Light – In-case the driver were ever to press the pit limiter switch (a toggle switch on the steering wheel) while on the racetrack, it would be blindingly obvious why the engine has lost power. This also helps the driver know he has activated the limiter before crossing the pit entry.

Front Tire Lock-Up Alert – If you’re driving an open wheel car that’s great, you can see the front tires lock up and know exactly when you’re smoking them. In the case of GT cars it can be tougher to modulate inside tire slip when trail braking into a corner, or braking to the threshold of the front tire grip. Using some simple math and user conditions in the ADL2 we have a progressive front tire lock up alarm, that tells us when the front tires are starting to lock, and progressively more LEDs are illuminated to indicate more lockup.

In this example the front left wheel is quickly locking and then un-locking, progressing through all 3 stages of alarm.

Rear Axle Lock-Up Alert – Similar to the front axle lockup, the center two LEDs will light up whenever the rear axles exceed a negative slip threshold relative to the ground speed of the vehicle. This can be useful for alerting the driver to a botched down-shift which locked the rear tires, or can be used to monitor braking at the limit where the rear axle may be locking up (although this can usually be felt by the car dancing all over the track!)

In this example the rear lock up warning light flashes twice, indicating a situation where the rear axle momentarily slowed down, sped up, and then slowed down again. This is what a driver might see under aggressive braking and downshifting.

These are just some of the infinite possibilities you could program into your SLM. A useful tool for the driver, made incredibly useful by the power of the ADL’s user conditions and infinitely customizable functions. This is one of hopefully many future posts displaying how powerful Motec equipment is, and how it is advantageous over competitors products for those looking for the best.