Boost Control Plumbing – Get it right, save money.

I’m not sure what the deal is with boost control plumbing/wiring, but it is by far the most common issue I have when tuning turbocharged cars. I get that it’s not something you can test on an un-tuned car, as you’re likely not going to be blasting off into boost to see where (and if) the gate opens. But re-plumbing wastegates isn’t something that you want to be doing while you’re paying for dyno time. So let’s get it right. And to get it right, we’ll make sure you understand exactly how the boost control solenoid works, and how the wastegate you’re using works.

First of all – let’s look at how a boost control solenoid works. As the name implies, the valve is a solenoid. Meaning it mechanically actuates when it receives 12 volts on one side, and ground on the other. Like most solenoids, polarity does not matter. One wire will typically get 12V switched power, shared with other ECU functions, and the other wire will go to an output on the ECU.

In Motec land that would be called an AUX out, or HB out, in Haltech land that would be called a DPO. Most ECU manufacturers call their outputs something different, but you need to ensure you connect the ground side of the solenoid to an output that can be pulsed at a medium frequency (typically ~30hz), that is designed to work for boost control. Some ECUs have mandated pinouts, and some ECUs can only “switch” some outputs versus pulse width modulation, so be sure the pin you’re connecting to is acceptable.

A boost solenoid typically has 3 ports. One port is always connected to one of the other two ports – this is called the “Common” port. This is important – I’ll touch on it later.

So that’s all well and good. The next thing you need to figure out, is which ports are which on the boost control solenoid you have. Usually a quick google search will reveal this. On the common blue “MAC” solenoids, which are what the majority of cars use, the port layout is most likely as follows: 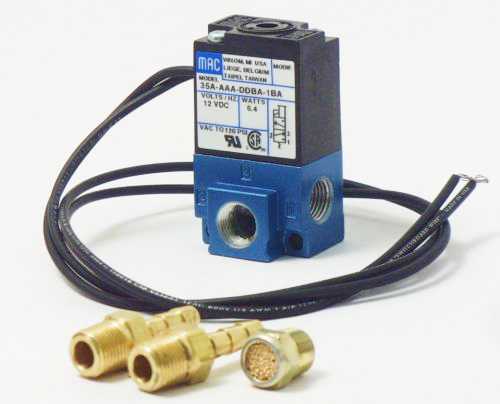 Now that you understand how the valve works, let’s look at how a wastegate works in both an internal and external setup, and how to properly plumb our solenoid. Firstly the simple, internal wastegate setup where the actuator has only one port.

When the wastegate door opens, obviously boost goes down (google how a wastegate works if you need more information on that). When it stays shut, boost will continue to rise (assuming the engine is producing the energy to spool the turbo). The highest boost pressure possible would occur when no signal is given to the wastegate actuator, at which point the wastegate would only open if the back-pressure in the exhaust manifold exceeded the force that the actuator spring preload was applying to the door. Usually at low to medium RPM, this is engine destroying levels of boost even with a factory turbocharger.

Note: we cannot LOWER boost below the wastegate spring pressure.

So, we connect the actuator to Common, the intake manifold to “NO” and the “NC” port is either left open to atmosphere, or connected back into the intake post MAF for emissions / correct MAF metering. If the NC port is left open to atmosphere, be sure to mount the solenoid so that excessive moisture cannot enter the port, as this can fail the solenoid over time. A drain spout, or pointing the exhaust port downwards can help ensure the solenoid will drain if any moisture happens to enter. 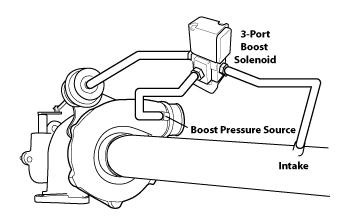 Why the actuator MUST be connected to common:

If you’re clever, you might be thinking it doesn’t matter which way the boost solenoid is oriented, as long as the C and NO ports are connected to the boost line. When the solenoid is not powered, the wastegate gets full signal, and when the solenoid is powered, the wastegate gets no signal, right? Well… yes but there’s more to it. The reason the actuator MUST be connected to the common, is so that it can vent to atmosphere when the power is applied to the solenoid, dropping pressure in the wastegate and causing it to raise the boost. If we don’t have the actuator plumbed to common this is what happens (THIS IS BAD, DON’T PLUMB IT UP THIS WAY):

The external wastegate plumbing is a little bit more complicated, because there are two ways you can plumb an external gate. You can do it the exact same way as the internal wastegate, as shown in the diagram below. When pressure is applied to the bottom of the wastegate the system works exactly the same as pressure applied to the top of an internal wastegate actuator. More pressure pushes the valve open, reducing boost. The NC port can be either left open to atmosphere, or connected back to the intake post MAF. The top port of the wastegate should be left open to atmosphere. 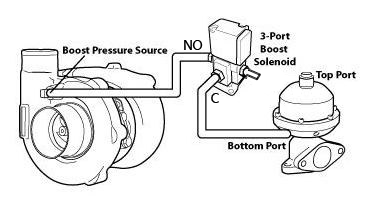 Simple plumbing of a 3 port boost control solenoid for an external wastegate. Base image credit: COBB

Let’s call this method the “tee” method, as there must be a tee installed from the boost pressure source to ALWAYS give boost pressure to the bottom of the wastegate. The way this setup works is quite simple when you think about it, despite maybe being confusing at first glance:

The tee method is the preferred method to plumb external wastegates, and while I haven’t tested the response and characteristics of the two boost control methods back to back on the same setup, that is certainly something that I should do to show the differences, if any. In my experience, the simple method works just fine in most cases, and may be preferred if you value simplicity (I know I do).

One last thing before I finish this post. If you’re installing an external wastegate, for the love of god, KNOW WHAT SPRINGS YOU PUT IN THE WASTEGATE. Tuner’s don’t like rolling the dice and having to just guess at when to let off. This is esspecially scary for applications that don’t have ECU’s capable of boost cut (some OEM naturally aspirated based ECUs). We like to be able to start at a safe boost pressure, and move up from there.

Thankfully I haven’t been caught out, but I’ve had my fair share of times when either a plumbing or wastegate problem was trying to set me up for disaster. So please, be prepared and let your tuner know what to expect. Have your boost control system plumbed correctly so that we can save you money and spend our time tuning, not fixing!