Feeling strongly about the change to electric vehicles, and wanting to know more about them and hopefully become a leader in the realm of performance electric propulsion – we have taken on a significant project to convert a 2014 Lotus Evora into a capable, refined and passion inspiring sports car. Our goal is to have the car put down more than 400 horsepower at the wheels, a staggering 150 more than stock, while weighing in as close to factory as possible.

Using our experience in Motorsport we aim to create a car that is not just fast in a straight line, or efficient over long highway drives – but also incredibly well balanced and fun to drive in canyons and on racetracks alike. We are working hard to maintain all of the Lotus’ fantastic characteristics, while helping get the car’s performance up to borderline supercar levels. Our performance target is a 991 Porsche GT3. We will not rest until our build laps faster than a GT3, rides more comfortably and attracts more attention.

Our Lotus Evora makes a slight compromise of range in exchange for weight. The battery pack size is 32kWh – approximately 2/3rds of the size of the original Tesla Roadster. The advantage in our case is that the infrastructure for fast charging has significantly expanded since the original Roadster release in 2008. 32kWh will give us a range in excess of 200km, which is more than enough for a high performance weekend car. For longer trips, the battery pack will be able to be charged to 80% in 35 minutes at standard Chademo Level 3 charging stations.

At the heart of our Evora is a Tesla drive unit from an 85kWh Model S. Thanks to some extremely clever partners we are very close to having complete control of the motor. Controlling all of the many electronic devices in the car is a Motec M150 that has been configured with custom firmware that we have developed in house as Motec M1 Build developers. Hundreds of hours of writing code in Motec’s IDE has allowed us to have OEM level integration with both the Lotus base vehicle and all of the other OE sourced modules to control the electric powertrain – such as the DC inverter, charger, monitoring sensors and drive unit.

The first phase of development is aimed at making all of the systems work and getting a baseline for the performance of the vehicle. The second phase of development will be optimisation and that will include work to improve range – such as aerodynamic modifications, rolling resistance and friction reduction, and also work to improve performance by designing and testing new components to replace any weak-links that show up in the first stage of testing.

The best way to follow along with our build and development is through Instagram and the LotusTalk forums. More blog posts will come as we start to make real progress with the car. Thanks for your interest! 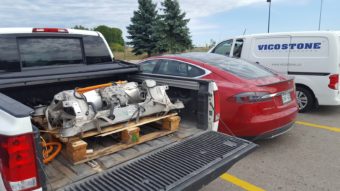 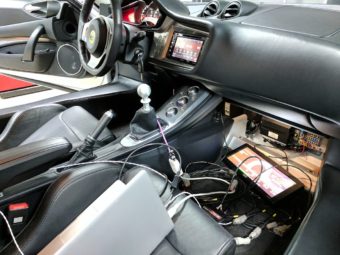