Bing’s car was an interesting one. The tune went exactly as expected until we started adding more than 14 pounds of boost. Rather than making more power, the engine actually started making LESS. There was obviously more pressure at the intake manifold, but the air was not flowing across the engine. Hardly any additional fuel was added despite the extra boost, and timing had to be reduced due to the extra heat, reducing power. Interestingly, the power drop off only occured at higher RPM.

To me this means that the additional boost allowed for more airflow and power at lower engine speeds, but at some point the engine would not flow any more air. Most likely, this was caused by the high-flow cat and the fact that bing’s car is burning oil, which is possibly plugging the cat up.

As a result, I suggested only running the car at 14 pounds of boost, which resulted in a healthy 320whp: 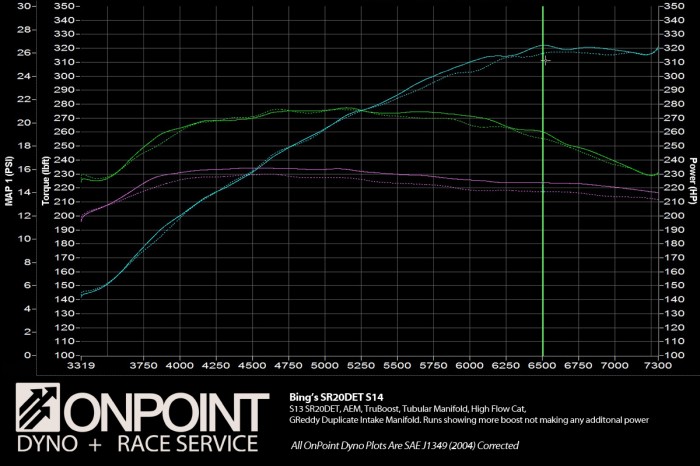 We will have to follow up with a test removing the cat, and see if that helps the power output. Regardless, at 14 pounds of boost 320whp is quite impressive!