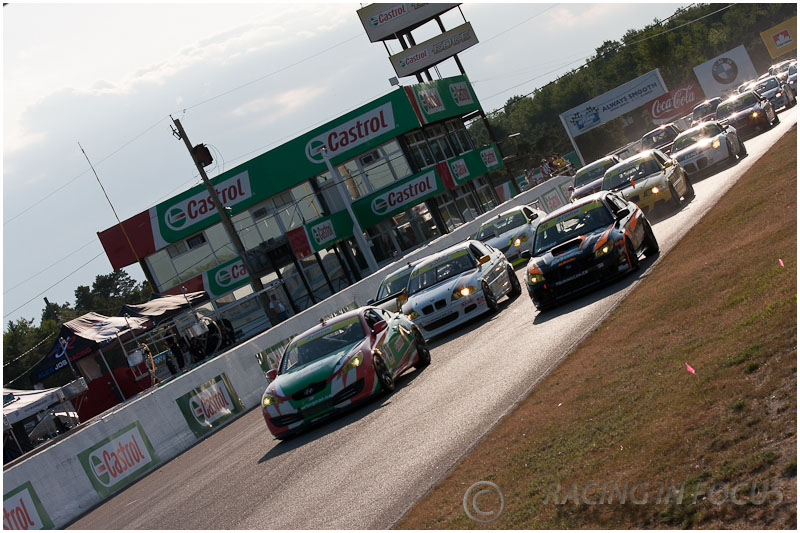 Canadian Touring Car 2011 is over as quickly as it started. The season consisted of 15 races over 8 weekends, only one of which that gave us more than one weekend in-between to prep and get back to work. I think despite my personal bad luck, this was the most successful season for Hyundai in professional road racing – certainly in North America. We were able to win Hyundai’s first ever North American road racing Manufacturers Championship, and we’re proud to have done it with such a new platform.

Although we were forced to switch to 2.0L engines, and were the first to competitively race this engine (possibly in the world?) we produced enough horsepower to compete with the fastest cars in the series,  and never had a single engine failure. The engines were bone stock – infact purchased from a scrap yard! They never missed a beat.

Our brand new SG-Motorsport chassis electrical harnesses worked flawlessly, and we had no troubles with any chassis circuits in the car. We DID however, have a problem with engine vibration causing injector and coil wires to repetitively break about 2-3 inches from the connector. I figure that solid engine mounts was a bad idea for an inline-4, and we have some softer mounts to go in to help reduce vibration related failures.

Since the start of this season we had Penske dampers front and rear, and the cars were quite clearly the best handling cars in the series. Despite not having any Data to work off of to improve the handling we still had both cars setup fairly spot on for almost all the events, and were able to get the glorious feeling neutral slide on trail brake to power down grip that every rear wheel drive car aspires towards.

Unfortunately we had some very strange breakages, at least myself personally in the #14 car, that undoubtedly cost us the championship. Multiple power steering hard-line failures pre-season were not fixed in time and took us out of a race at Mosport and almost again at ICAR. A ball-joint failure put the car in the wall at Mosport after having won the race the day before, and a sheared rear differential bolt meant it was the end of the day when – we were also leading – at the F1 track in Montreal. Again at Mosport a broken wastegate arm meant no boost, and we got to enjoy a Sunday drive around the GP track with about 150whp. In Three Rivers our idea for an intercooler water sprayer would have been great – if it didn’t leak out on the pace lap and get water on the ECU, ending our race before it even started.

The year was certainly very mentally frustrating, seeing the car have some sort of crazy new failure each weekend – but luckily our last weekend was problem free for #14, which allowed us to nearly sweep the weekend with the fastest time in practice, qualifying (new lap record), lead from start to finish in race one – AND, lead from start to nearly finish in race 2, before Borgeat (after realizing that he had won the championship no matter what since he had completed 70% of the race distance) gave me a fierce run for my money after a yellow flag restart. All it took was missing 4th gear (another problem that has plagued us all year) on the front straight, and he was by me with one lap to go. It was fun, and I wish we had a few more laps to fight it out!

Bob had an extremely successful year, finishing 3rd in the championship with a brand new car. We built this car from the ground up in only a few months prior to the first event, and only got it out to one test day before the race season started. Funny, it was almost 100% reliable all season. The only failures we had were the result of crashes, and the injector/coil wiring failures mentioned previously (which never took us out of a race, just slowed us down).  Bob’s driving also improved incredibly throughout the year, and a few times I was waiting for the day that he would beat me in out-right lap time. Good thing that never happened, or I would never hear the end of it.

I think we developed a lot as a team, especially from a management and organization side of things.  I tried a lot of different techniques this year and have figured out the best way to make things work moving forward with an even larger team.

Hopefully if you came out to watch any of our races you had a good time and we put on a good show – and if you missed them, you’ll have to read all the previous blog posts to catch up with the absolute craziness that we dealt with this year – don’t forget about the videos!